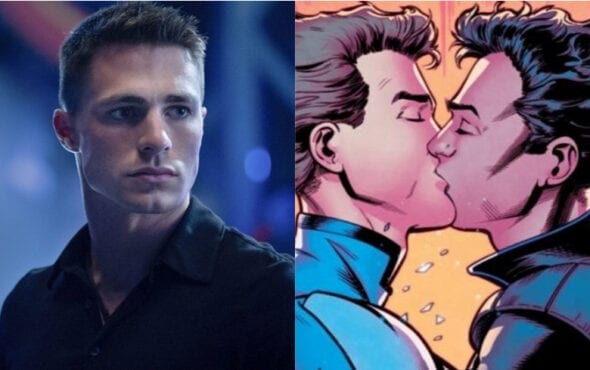 The star volunteered amid reports that Shia LeBeouf was being considered for the role.

Following its acquisition of Fox, Disney gained the rights to the X-Men franchise, and there are plans to reboot it.

News about how the X-Men will be unveiled in the Marvel cinematic universe was possibly leaked earlier this week, with the series looking to feature Iceman, potentially with Shia LeBeouf in the role.

However, given that Iceman is one of the most notable gay superheroes in the Marvel universe, LGBTQ+ fans are hoping that an LGBTQ+ actor will play the role.

Enter Teen Wolf and Arrow star Colton Haynes who put himself forward for the role with a simple tweet, featuring a gif of the character and an emoji of someone raising their hand.

Colton’s tweet came just days after he cryptically tweeted: “Sitting here in shock & smiling. One of the biggest moments of my career/life happened today & I can’t wait to let y’all in on the secret soon.”

Although seeing Colton as Iceman would be amazing, according to We Got This Covered, Marvel are considering Shia LeBeouf for the role. A source, which had previously correctly spoken about a She-Hulk series on Disney+ and a live-action Robin Hood remake, told the site that Marvel were “keen to work” with Shia, perhaps as Iceman.

The internet is generally behind a queer actor playing the role, with Scott Evans, the brother of Captain America star Chris Evans, writing: “I am a Shia fan. But can Iceman, a prominent gay character in the comic books, PLEASE be played by a gay man?”

And responding to Colton’s tweet, one fan wrote: “Yes! We need a gay actor to play Iceman. No more straight people playing gay characters!” And another wrote: “I’ve been thinking you would make a perfect Iceman. No one could be a better Bobby Drake.”

Iceman was revealed to be gay in 2015, for the 40th issue of All-New X-Men, when a younger, time displaced version of the character was had his sexuality discovered by friend Jean Grey, through her powers of telepathy.

Later, the character had a passionate embrace with Inhuman star Romeo, which received a full page spread.

However, in 2018 the final issue of the X-Men Extermination series from Ed Brisson and Pepe Larraz completely reversed Iceman’s character development, and put him straight back into the closet.

Marvel fans were understandably outraged, with one fan posting on Twitter: “Fuck Extermination. Fuck Uncanny X-Men. Fuck all the creators and editors who couldn’t manage to bother finding a way for young Bobby Drake to be happy.

“The message this sends to LGBT people is palpably dismissive and cruel.”

Iceman’s casting isn’t the only member of the X-Men that we have our eyes on, as legendary LGBTQ+ actresses, Dominique Jackson and Janelle Monáe could possibly play Storm. Fans set up a petition to campaign for Dominique to play the legendary character, while Janelle said it was one of her “dreams” to play the character.