Cinderella is a fun, frivolous night of panto – review 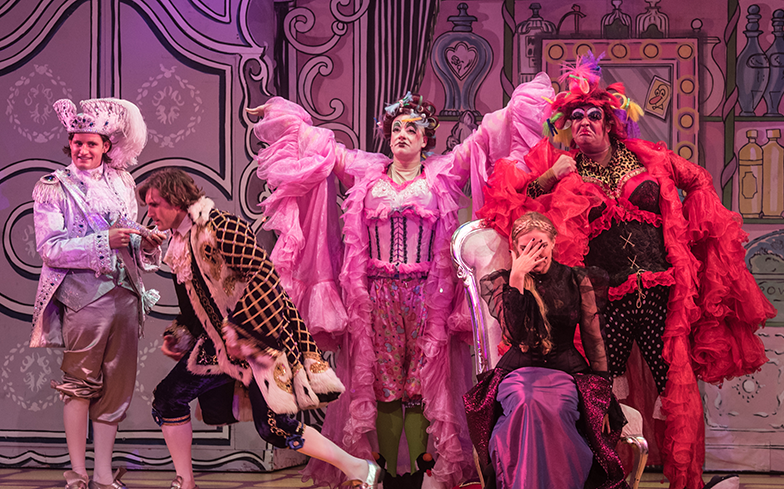 We popped along to the New Wimbledon Theatre this time last year to check out their Christmas pantomime, Aladdin, and we had a fun night with it. That production featured some big names in the lead roles, with Pete Firman in a part-acting, part-compere role holding everything together; Cinderella follows the same formula. Tonight’s production stars soprano singer Lesley Garrett as the Fairy Godmother, former Pussycat Doll Melody Thornton in the title role, former Eastender Samantha Womack as the malevolent Baroness Demonica Hardup, and Pete Firman returns, this time as Buttons.

The story requires no introduction, so we’ll cut straight to what we enjoyed. Cinderella ticks lots of the boxes you would expect from a panto – it provides a family-friendly, fun and frivolous night at the theatre. Instead of one dame, we’re treated to two – Leon Craig and Bobby Delaney are in drag as the Ugly Sisters, and while we thought they were a little tame, their shtick was still amusing enough. It’s all very straightforward, easy viewing, with some nice songs thrown in to boot. Firman’s comic interludes and magic tricks help liven proceedings when the momentum starts to lag.

On to what we didn’t enjoy so much and really this production is a bit by-the-numbers. The sets are cute but flimsy, the songs are pleasant but pedestrian… everything is fine, but very little excels. There’s an impressive moment just before the interval where Cinderella’s carriage flies across the stage – it doesn’t just stand out because it looks great, but also because nothing else even comes remotely close to challenging it. While there’s plenty here for the kids, there aren’t a great number of jokes for grown ups – Garrett tries to inject a number of opera puns into the mix, but we’re not convinced this is the right audience.

The saving grace is Firman’s audience participation and magic which really help propel the evening along. He’s a great talent and a real joy to watch, whether he’s poking fun at the adults in the stalls or bringing children up on to the stage for an unpredictable routine. A handful of his tricks are impressive, while the deliberately naff ones raise a chuckle. His turn as Buttons is endearing, and he manages the lively audience well in his role as compere.

There’s plenty to like about this production of Cinderella. It doesn’t do anything exciting or unexpected, but then it doesn’t really need to. What we have here is a perfectly enjoyable evening of light entertainment, suitable for all the family.