Cillian Murphy astonishing in Grief is the Thing with Feathers – review 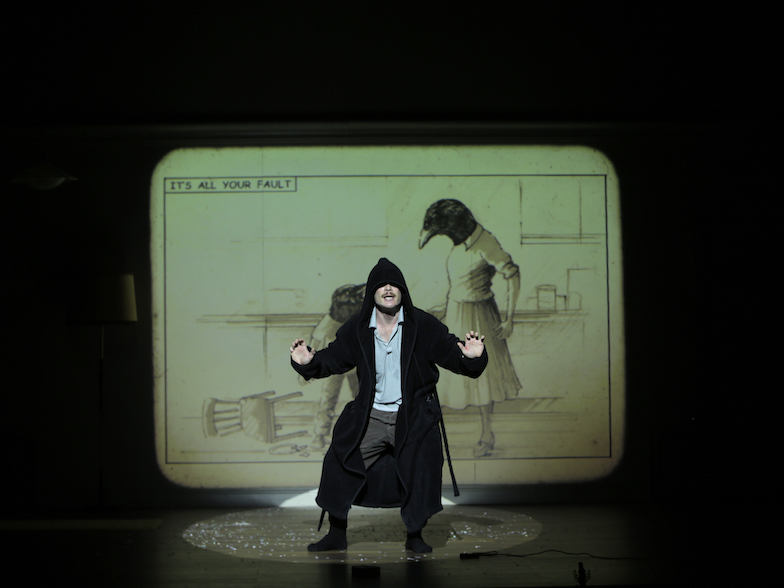 The Peaky Blinders star delivers a captivating performance in this staging of Max Porter’s novel, adapted and directed by Enda Walsh.

Grief is the Thing with Feathers is a difficult story which deals with some heavy subject matter. It focuses on a man whose wife dies suddenly; we see his coping and grieving processes unfurl before us, as he struggles to come to terms with his new life and raising their two young children on his own. One moment he is a man in mourning, the next he is the destructive crow, an unsettling alter ego born of grief and his obsession with Ted Hughes’ writing.

It’s a piece which aims to shock and confuse. There is a lot going on here from a technical perspective – it’s frequently a sensory overload, one that is at times difficult to watch. There’s a lot of noise, flashing lights, huge projections; the dynamic of the play shifts very suddenly and dramatically; it seems to be an accurate depiction of the man’s chaotic and fragmented existence. There are also moments where it’s really exhilarating.

At the heart of the play is an astonishing and athletic performance from Cillian Murphy. He’s relentlessly energetic, especially as his crow alter ego, and there’s no respite for him during the 90 minute straight-through show. He pecks, struts and caws his way across the stage, leaping up on to shelves and cupboards – it’s captivating to watch. He is also occasionally – and unexpectedly – very funny, with a deadpan aside or matter-of-fact comment.

For a play which deals with such difficult material, it manages to deliver a surprisingly healthy dose of humour. A particularly effective sketch involved the projection of a comic book-style narrative which recounted one of the man’s memories as a wonderfully dark comedy. There are also a handful of moving moments, particularly towards the show’s conclusion.

It’s an impressive production. There were a handful of moments where we felt it was all getting a bit much – sometimes it was too over-the-top, with the audio and visual elements distracting rather more than we’d have liked from Porter’s original text. We’d still recommend a trip to the Barbican to check it out, though – it’s a great story and Cillian Murphy delivers a captivating performance.

Gay Times gives Grief is the Thing with Feathers – ★★★★☆