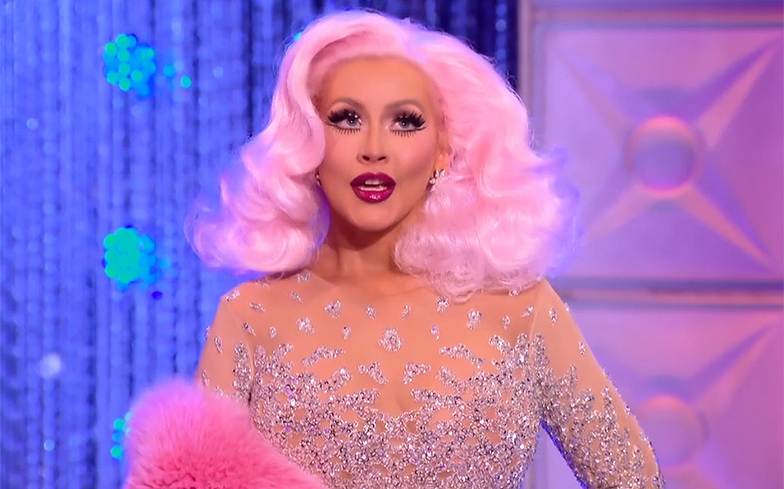 The one and only Christina Aguilera – also known as Legend X, Princess of Pop, The Voice of a Generation etc – made her Drag Race debut yesterday, and henny, it provided us with the most iconic runway entrance in the show’s HERstory.

“Notice any familiar faces? I’ve invited back some of my favourite queens from the past decade, to help me judge this challenge,” said Ru. “To win? You must slay the runway. Do whatever it takes to stand out from this legendary crowd.”

Eureka admitted: “It’s time to do the first mini-challenge and I see all these former queens and immediately, my butthole has sucked up the crotch of my fucking leotard. I’m looking at all these faces of my peers, clearly they’re judging the sight of me. This is a lot of pressure on the first day! Season 10 ain’t playing baby!”

Then for the maxi-challenge, the queens were required to construct a runway outfit from miscellaneous items found at a variety store, which was inspired by the first ever challenge on RuPaul’s Drag Race, ‘Drag on a Dime’.

After the contestants sashayed down the runway in their 99p store extravaganza, RuPaul addressed the room: “Now, before the judging begins, I have an announcement to make. There’s one more queen I’d like to add to this competition. A queen we all know and love. Please welcome back to the main stage… Farrah Moan.”

In walked Christina mother-tucking Aguilera, looking fierce as fuck donning a sparkly frock and PINK HAIR. It’s without a doubt the best she’s ever looked, and of course, the queens were left gagging! Ru told her, “Farrah Moan, you look beautiful in every single way,” to which she responded “Oh Ru, I only have one thing to say…”

Xtina then showed the queens exactly how she earned the honorific title of “The Voice of a Generation” with an incredible, breathtaking display of her vocal prowess. It’s safe to say we were positively cooped, gooped, and gagged heeenny.

The deliberations continued, and Mayhem Miller was announced as the winner, whilst Yuhua Hamasaki and Miz Cracker placed high. Kalorie Karbdashian-Williams and Vanessa Vanjie Mateo lip-synced for their life to Christina’s iconique 2006 single, Ain’t No Other Man.

Both competitors slayed the performance, but Vanessa lost out to Kalorie, and was told to sashay away.

Alright. I think we can all agree that Cracker has charisma, uniqueness, nerve, and talent #DragRace pic.twitter.com/D6qLT3TqDH

That challenge was EPIC! #DragRace

IF THEY DON’T BRING BACK @VanessaVanjie I AM GOING TO RIOT. #BringBackVanjie #dragrace

I dunno ‘bout you but I’ve never seen RuPaul laugh this much in panel. @miz_cracker bringing all the gigs! Yas, GAWD!#DragRace #TeamCracker pic.twitter.com/D8Rs3J2LFW

Best part of #DragRace is the #Legends commentary and @JinkxMonsoon getting air time for being bitch slapped 😂😂 pic.twitter.com/XLbSBxxDSZ