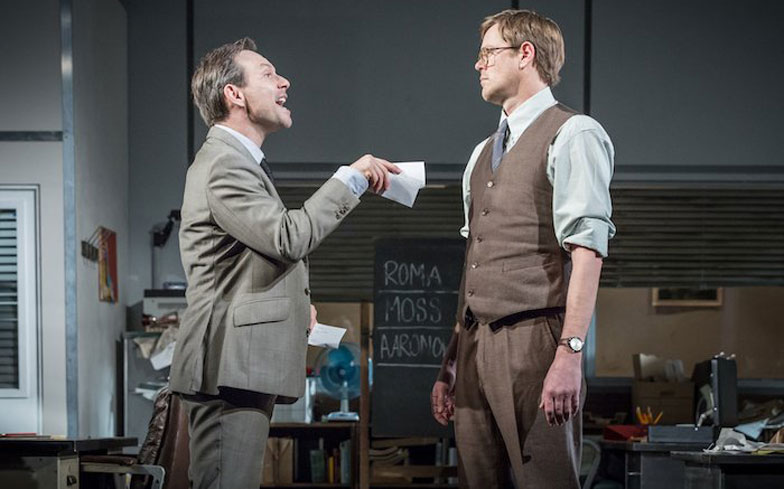 David Mamet’s script will leave you in a circle of laughter as Glengarry Glen Ross returns to the West End – this time starring Christian Slater.

Displaying mistrust and dishonesty, all while showing a group of men pushing for their ‘American Dream’, the great American salesman comes under threat as this ensemble of men fight to come out at the top.

Weirdly perfect in a period of Trump’s America, the idea of mistrust and business-like spinning of stories seemingly launches Glengarry Glen Ross into a relevant world. Christian Slater’s take on alpha salesman Ricky Roma the vision of distrust we’ve become somewhat familiar with.

Inside the Playhouse Theatre, Glengarry Glen Ross is split across two acts and two rather differing locations. However impressive its varied scenic design is – by Chiara Stephenson – its the quick-paced and somewhat cutting dialogue that is sure to leave you grasping for air between jibes.

Related: Inside Pussy Riot is a quirky piece of performance art – review

When a series of events plummet the office into issues and the police come calling, Shelly – played by Stanley Townsend – and team are launched into both defence and attack to try and get through. However character slips and a determination to come out with their credibility still present, friendships soon crumble – and the business seemingly does too.

Sam Yates’ production might be a little short to begin, asking audiences to take in reams of dialogue just seconds into the first act, but an open ear and welcoming mind will draw it all in. Yes, it can be, on occasion, a little difficult to interpret in quick concession, but maybe that’s what makes the second act quite so enjoyable. A fast change in pace and location means the macho office men soon become like little mice – their vulnerability fully on display.

And if David Mamet’s script won’t get your creative juices flowing then the sight of charming Christian Slater in a suit might.