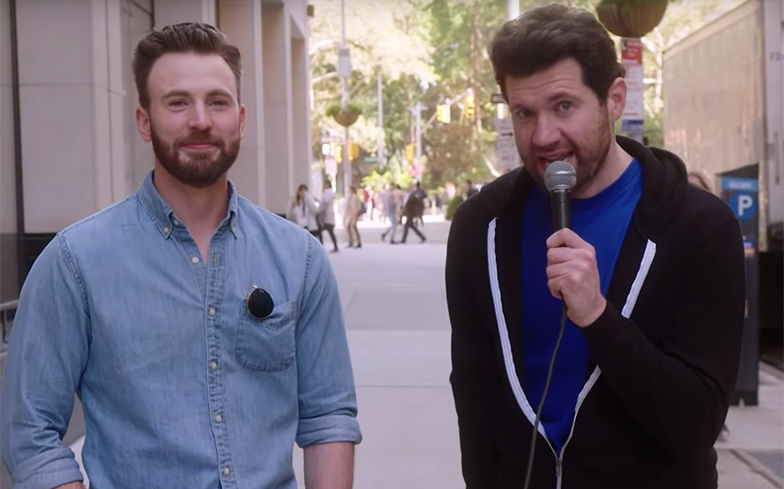 “Would you like to sign this petition to remove Kevin Spacey from homosexuality and add Chris Evans?”

Billy on the Street is now available to stream on Netflix! It’s about time, eh?

The show – which sees Billy Eichner patrolling the streets of NYC as he terrorises pedestrians – is also celebrating its historic “15th anniversary” so this week, the comedian is joined by a very special guest star: Chris Evans.

Captain America is dragged around the city as the American Horror Story star questions random strangers on serious issues, such as: “Would you like to sign this petition to remove Kevin Spacey from homosexuality and add Chris Evans?”

The pair ‘bump’ into fellow Marvel star Paul Rudd and obviously, Billy takes this opportunity to ask pedestrians whether they’d rather sleep Chris or Paul. One fan responds: “Paul Rudd all the way, because he’s from Clueless and he’s never-ageing!”

Paul is then pushed to the side as Chris faces his worst nightmare: “a bunch of lesbians that don’t care that he’s hot!” Chris, Billy and the unidentified ladies then jolt down the street in another iconic “let’s go lesbians, let’s go!” segment.

Watch Chris Evans’ hilarious guest-appearance on Billy on the Street below.

The film has received universal critical acclaim. It is scheduled for release on 27 November 2019 – watch the trailer below.