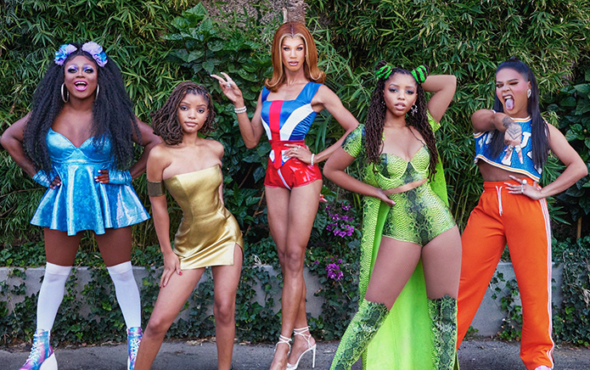 The R&B duo closed the 2020 ceremony with a socially-distanced, Spice Girls-themed performance of their sultry single Do It inside an empty bar, before Mayhem Miller, Naomi Smalls and Vanessa Vanjie Mateo joined them as back-up dancers.

Chloe paid homage to Mel B’s horn-inspired hair while Halle opted for a sleek and sophisticated number in the vein of Victoria Beckham.

Mayhem channelled her inner Emma Bunton with a cute frock, Vanjie high-kicked in sportswear as Melanic C and Naomi slayed in Geri Halliwell’s iconic Union Jack dress. It was serve after serve after serve.

“We are SO proud to stand alongside our #LGBTQIA+ family at the #GLAADawards this year,” the duo wrote after the performance. “thanks to these beautiful queens @naomismalls @vanessavanjie @theonlymayhem for performing with us. the melantated spice girls.”

The performance received rave reviews on social media, attracting praise from stars such as Meghan Trainor, Tinashe and Rina Sawayama.

Watch Chloe x Halle’s sickening performance of Do It below.

Do It is the first single from the duo’s sophomore studio album, Ungodly Hour. Upon release, the album received widespread critical acclaim and became their first top 20 entry on the Billboard 200.

Last year, it was announced that Halle will be playing Ariel in the new live-action adaptation of 1989 animated classic The Little Mermaid.

According to Variety, director Rob Marshall (Chicago, Into the Woods) spent two months meeting with talent auditioning for the role, but insiders said 20-year-old Halle was a ‘clear front runner’ from the very start.

“After an extensive search, it was abundantly clear that Halle possesses that rare combination of spirit, heart, youth, innocence, and substance — plus a glorious singing voice — all intrinsic qualities necessary to play this iconic role,” Rob said.