Chizzy Akudolu really made it her night in festive Strictly special 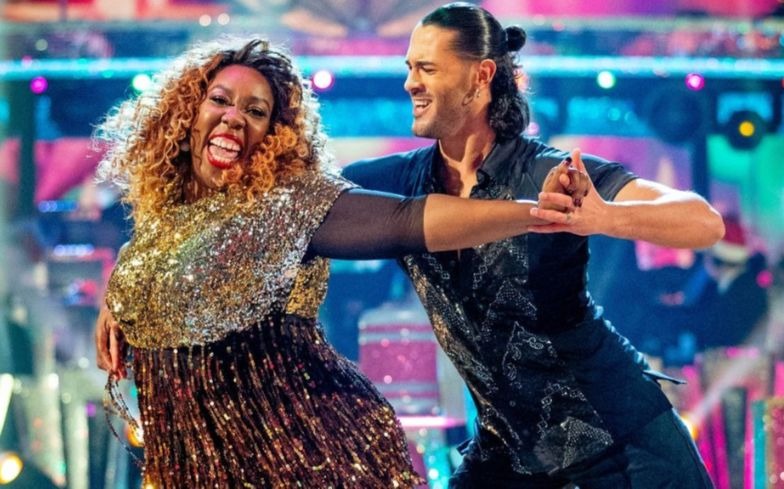 Chizzy might not have won, but it’ll still be her routine we watch on repeat.

The main series of Strictly is over, with Kelvin Fletcher being crowned the winner, and although incredibly close in the vote, most of our readers (46%) wanted Karim Zeroual to be named the winner.

But there’s always the Christmas special to send the year off in a dancing fashion, and this time with less homophobic politicians. This year we were treated to four finalists, with Mark Wright, Debbie McGee, Gemma Atkinson and Joe Sugg all returning, alongside two notable contestants, those being TV presenter Richard Arnold and former Holby City actress Chizzy Akudolu.

The show started with a nice routine through several festive landscapes, although bizarrely featured less than half the cast dancing, and given how amazing Debbie McGee is, it is a bizarre choice to just sit her in a merry-go-round. However, on the plus side unlike previous Christmas specials, all the professionals were involved in this routine, as opposed to the six with a partner.

And properly kicking off the special was Series 15 runner-up Gemma Atkinson, with her real-life partner, Gorka Márquez. Their VT showed how they’d since become a family, aw, and then their whole dance was about mummy kissing Santa Claus, aw? Considering how Gemma was much better at the ballroom, it was a surprising choice, but it still started the festive mood well.

The next dancer was Series 12 finalist Mark Wright, who delivered a festive salsa. Although not like a fine wine that’s matured with age, Mark still delivered an incredibly fun dance, and a lot better than any festive salsa should be. Just a shame he still missed out on that ever-elusive 10.

Next up was Series 15’s Chizzy Akudolu, who was sadly the first eliminated contestant. And she showed why the judges should’ve picked her over Brian, as she took full control of the dance, and well and truly made it the cheeky cha-cha-cha. She was a goddess on the floor, and those splits were sensational, especially with how well they fit the timing of the music. Sign me up to any Christmas party that has Chizzy out on the floor!

Despite the fact, that you could’ve ended the show there and then, and I would’ve been happy, we did still have three more dances to go. Series 10’s Richard Arnold was first up with a Grinch-themed foxtrot, but it was slightly disappointing to have nobody reference the fact that when he did the foxtrot on the show back in Series 10, he forgot the routine midway through. The foxtrot this time around wasn’t anything special, but Richard is exactly the sort of contestant you secretly wanted to come back.

It was after Richard that we got to the real contenders. First up was one of last year’s runner-ups, Joe Sugg, dancing with real-life partner Dianne Buswell. It wasn’t surprising to see them tackle a street routine to Sleigh Ride, and their matching candy cane suits were cute as hell. It was surprising that during his original Strictly run Joe never scored that perfect hit, but this time it was well deserved.

The finale was Series 15 runner-up Debbie McGee, and like before she bewitched us all over again. Her quickstep was as speedy as Santa’s sleigh, and it even had her iconic spin from her salsa. And her spin wasn’t the only iconic moment from that dance as there were plenty of references to ‘D-E-B-B-I-E!’ The only gripe I can have with this dance is that it would’ve been a true Christmas miracle to see her dancing with Giovanni again.

The show’s final routine was a white showdance-esque number with feathers and top hats galore. And although Craig might not have dressed up for the judging panel as he usually does for Christmas, but he did turn up as a massive snowflake. It might not have been his drag costume, but it was still an amazing finish.

Although I was fully expecting Joe to win, although all fingers were crossed for Chizzy, it was Debbie McGee who walked away with the trophy. And with a routine like that, she fully deserved it.

And although Strictly is now finished until 2020, you can watch Debbie’s sensational quickstep and Chizzy’s iconic cha-cha-cha below.