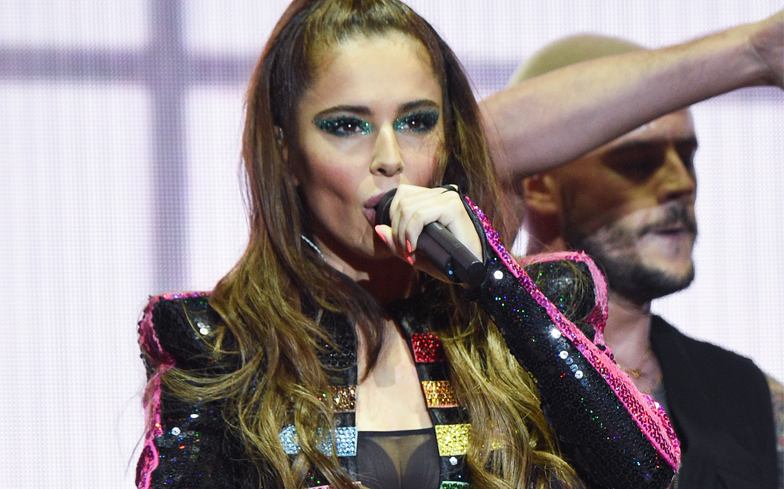 Thousands of Manchester Pride festival-goers got their lives on Sunday night when Cheryl gave a hit-packed performance at the celebrations.

The British star walked out on stage draped in a rainbow flag adorned the inclusive Pride colours, as well as the trans flag stripes to an empowering message of support to her fans.

“Love is described as a ‘profoundly tender, passionate affection for another person’. The description has no clauses or rules. It does not state the gender or sexuality of whom we must choose to love – only the words ‘another person’,” a voiceover recorded by Cheryl played as she stepped out.

“Together, tonight, we are celebrating the right to love and be loved by whomever we choose in our lifetime – and I believe we should fight for this love.”

The flag was then spread out to reveal the message ‘Fight For This Love’, which was painted by queer illustrator DOM&INK.

As Cheryl turned around she was dressed in a pink sequinned outfit created by Jack Irving, which was inspired by her original Fight For This Love military costume from the music video.

This new version, however, was adorned with the eight stripe colours from the inclusive Pride flag, as well as the trans flag colours.

When we say that the LGBTQ people in the crowd screamed at the reveal, we mean they screamed. Instant icon status.

“I think it’s important for all of us to spread that message,” Cheryl told us backstage just after the performance at Manchester Pride Live, for her only interview at the event.

“That’s what I believe wholeheartedly. It’s important for someone like me, in a position where people listen to what I’ve got to say, to spread that message of love.”

Sat in her dressing room, the singer is visibly shaking from the high of the performance and the outpouring of love from the crowd. She has holes in her tights on the knees, along with some grazing from the intense choreography. “And that’s two pairs of tights,” she says when we mention her bruised knees.

Considering the huge reaction to the hit-packed set – which included her No.1 singles Fight For This Love, Promise This, I Don’t Care, Crazy Stupid Love and Call My Name – as well as her massive LGBTQ following, Cheryl performing at Manchester Pride was the perfect fit.

“They’ve asked me for years and I’ve never been able to make it work with my diary,” she said. “This was the first time I could make it work.

“I love Manchester first of all. But then, whenever I play at a gay club, it’s always the best crowd. There’s always an energy of fun and love, and there’s no aggression. Nobody is throwing drink at you or starting a fight – you very rarely see that. It feels like a loving place where everyone just enjoys themselves.”

Throughout her nearly 17-year-long career in music, Cheryl has built a loyal LGBTQ following during her time in Girls Aloud and then her solo career. We ask what she has learned from her gay fans during that time.

“I didn’t experience those struggles, and so I have learned a lot of that through them.”

Ariana Grande, Years & Years, and Kim Petras were among the other stars the perform at Manchester Pride Live across the weekend.

The newly-built festival site played host to thousands of fans, making it the biggest Manchester Pride celebrations to date.