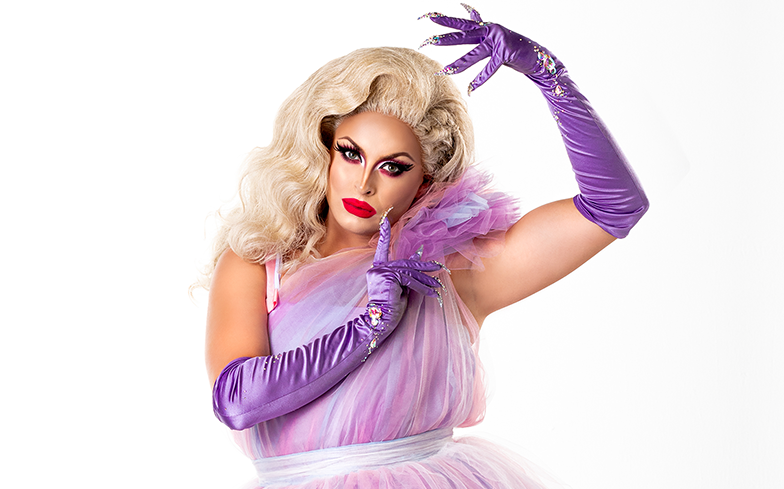 “Could you imagine me and Vanjie on the same season? That would make for iconic television.”

After seven weeks of tongue-popping, death-dropping and earning zero RuPeter badges (undeserved!), Cheryl Hole was sadly told to sashay away from RuPaul’s Drag Race UK. The dancing diva of Essex was – in the words of the GC – “all gamed out”.

This week, the final four queens – Cheryl, Baga Chipz, Divina De Campo and The Vivienne – were tasked with giving a sickening drag makeover to their mums and sisters. Although Cheryl’s sister left us gooped and gagged, she found herself in the bottom two with Baga and was defeated to the tune of Amy Winehouse’s iconic jazz-pop anthem, Tears Dry on Their Own.

“I know I did my best, I know my sister absolutely destroyed the challenge – she killed it. I left on an absolute high,” Cheryl tells us on the way to Nottingham for two back-to-back gigs. “I didn’t regret anything and I was so proud to have made it that far.”

Although she didn’t win a single challenge and sashayed before reaching the final three, Cheryl has cemented herself as a firm fan-favourite amongst Drag Race fans and has joined an elite group of competitors who have earned ‘meme queen’ status.

So of course, when we kiki’d with the legendary queen, we had to ask if she’d considering reappearing for a future season of All Stars, as well as that rumoured crossover season between the American and British queens. Get your jush below…

Why are you on a train to Nottingham? What’s there?
I’ve got a gig in Nottingham and then a gig in Hull straight after.

Blimey. You must be having a whirlwind of a day?
[Laughs] It’s been non-stop since 7.30 this morning but all I can say is I’m so grateful that I get to do this.

How does it feel to have made the final four of RuPaul’s Drag Race UK?
I have to say, I never thought I’d make it… When I was there, I never thought I would make the top four, but it was a journey. It was an amazing experience and I’m so grateful that I was given the opportunity by Ru and the whole team.

You’ve become one of the most beloved queens in the show’s HERstory – did you expect that kind of reception?
I really wasn’t expecting that. I mean, I knew people would latch onto people like Baga, and they were going to root for people like Viv… I was just the underdog that everyone counted out and I thought people wouldn’t like my shit.

I loved you this season, because you were unfiltered and it looked like you were just there to have a good time.
Yeah! I mean, there’s holding back. I’m from Essex! You can’t keep my mouth shut.

How was it watching the episode back?
I absolutely adored this episode. It’s one of the biggest highlights, that and the girlband challenge of course… and meeting Cheryl! It was three good back-to-back episodes and I know I did my best, I know my sister absolutely destroyed the challenge – she killed it. I left on an absolute high. I didn’t regret anything and I was so proud to have made it that far.

Do you think you deserved to be in the bottom? I thought you smashed it.
At that point, you’re picking at straws and you have to really look for the minor details. I thought I did an amazing job, but then again it’s down to the judges and what they like. I couldn’t take a place away from them three, because they all killed the competition and I had no badges whatsoever, so…

Were there any challenges you do think you should’ve won?
Well I really wanted to win the girlband challenge, not just because I love girlbands, but because I felt like I just came alive in that challenge and showcased everything. It’s just such a shame that the Cock Destroyers were as incredible as they were, and they deserved the win wholeheartedly.

If it wasn’t judged on teams, you absolutely would’ve earned your first RuPeter badge…
Well, I might take after the real Cheryl and go solo…

What was it like to come face-to-face with Cheryl, and lip sync her song in front of her?
It’s just one of those moments you never think is going to happen. You’re already in a surreal environment, filming Drag Race, and all of a sudden one of your icons is thrown right in front of you… You just don’t see that happening! I knew the minute that I stepped into that challenge that it wasn’t going to be my week, and it was probably my week to be in the bottom, so it’s just fortunate it was a song that I knew inside and out and back to front.

Do you know why they opted for a remix of Call My Name?
Right, Ru loves a remix. Any song, Ru loves it. I love the remix myself. I know that the original is iconic and it’s such a bop, but I love that remix. I’m a club girl! It’s a turn the party kinda bop.

Not only were you a fan-favourite this series, but you were the meme queen this season – how does that feel?
[Laughs] I can’t believe it, if I’m being completely honest. Everybody thought it was going to be Baga because she had that “much better” moment, but memes are things you don’t realise are gonna be memes. A lot of the things people picked up on, I didn’t actually pick up when watching the episode. I’m such a tit.

My favourite is the one with you stood without makeup with the massive blonde wig.
Oh my god, literally. That was my Twitter picture for a good two weeks and I think I might put it back. Have you seen the ‘Which Cheryl are you today?’ meme?

I have, I’m a three today.
I’m definitely a solid two.

Was there anything that didn’t air this season that you would’ve like audiences to have seen?
Well, I feel like they showcased everything. I don’t feel like there was a moment that wasn’t shown. The only thing I would say is… I wish they had shown an hour of the Snatch Game. There was lots of GC moments that people ragged on me for. They were like, ‘You didn’t get this quote in!’ I’m like, ‘They didn’t show that round!’

Which iconic quotes didn’t make it? I’m intrigued…
There was a whole round where I sat there with sunglasses on and I said, ‘Nah I’m going now Ru, I don’t wanna play anymore of these games.’ I also said, ‘You ain’t never gonna get this candy.’ Ru replied, ‘All T, no candy.’ On my mirror message I wrote, ‘I’m all gamed out!’

I love that. I assume you’re down for an All Stars – who would you like to compete against?
Ooh god. Well if it’s like All Stars 1, I’m doing teams with Blu, but I would 100% love to see Crystal. She deserves another shot, for sure. From the US show, oh my god, could you imagine me and Vanjie on the same season? That would make for iconic television.

I would love to see any of the UK queens in the same room as Tammie Brown.
Oh my god, it would be like a family reunion.

We need to see it. So that means you’re on for Drag Race US vs UK?
Well if they book the flight, I’ll be there.

Other than Drag Race UK, what would you say is your favourite season of the series?
Ooh. I dunno! Everybody goes for season six, and while it’s an iconic season, I love season nine. I thought it was great. Charlie not lip-syncing… I joke, I love Charlie Hides. But the queens, the calibre of drag, and Gaga! It was just such a great season.

How do you think Drag Race UK will change the drag scene here in the UK?
I think it’s just going to shine a light even more on local talent and the people that haven’t had the opportunity yet, because this cast is small. It’s only 10 queens, which gives more opportunity for several more seasons to showcase UK talent. I think more people are going to watch the show, get inspired, want to do drag more and then it’s just going to influx, rise and shine a light on British drag in the most positive way.

Who would you like to compete on season 2? I have my fingers crossed for Tayce…
Oh you know Tayce will turn the party! She’ll just talk absolute shit, all day everyday. I’ve got to root for my girls, so I’ve got to root for Ophelia Love, Kitty Scott Claus, Meth, Lydia L’Scabies, Meth, Her the Queen… and obviously Tayce.