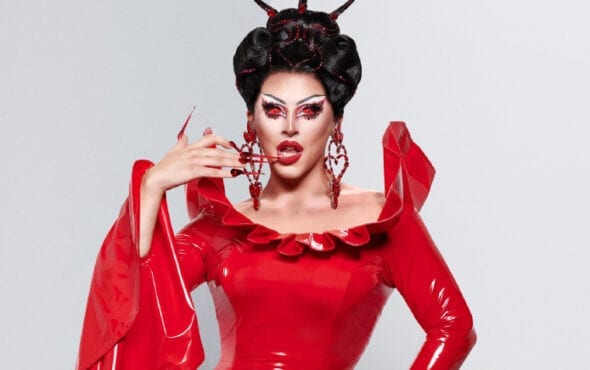 “I’ve seen all the Drag Race series and there’s not been one like it yet.”

After talking with Cherry Valentine, our hype levels for RuPaul’s Drag Race UK have soared through the mothertucking roof.

During our conversation with the entire season two cast for our digital cover last year, the Manchester-born performer declared the season as the franchise’s all-time best.

“I would describe it as iconic, fabulous, brilliant,” Cherry laughed over Zoom.

“Honestly, it’s probably the best series I’ve ever seen, and I’ve not even seen it yet. I’ve seen all the Drag Race series and there’s not been one like it yet, without a doubt.”

When we asked Cherry what she wants viewers to know about her drag, she confidently responded: “That there’s never been a queen like me on the show, and it’s gonna open the world’s eyes.”

She went on to say: “I think my drag is the most polished drag I’ve ever seen.”

In her previous interview with the BBC, Cherry said her style of drag is “glamour, dark, gothic and high fashion,” and described her stage presence as “flippy”.

Although she hasn’t been shantaying from club to club as long as the other girls, with less than a year’s experience to her name, Cherry is “proud” of what she’s achieved so far.

“I’ve worked hard at my drag, and I’m really proud of myself for throwing everything into the application process and making it through to this amazing platform,” she explained.

Cherry is also a qualified mental health nurse, and believes this has assisted with her drag journey – and vice versa: “I understand both myself and other people a lot more now.”