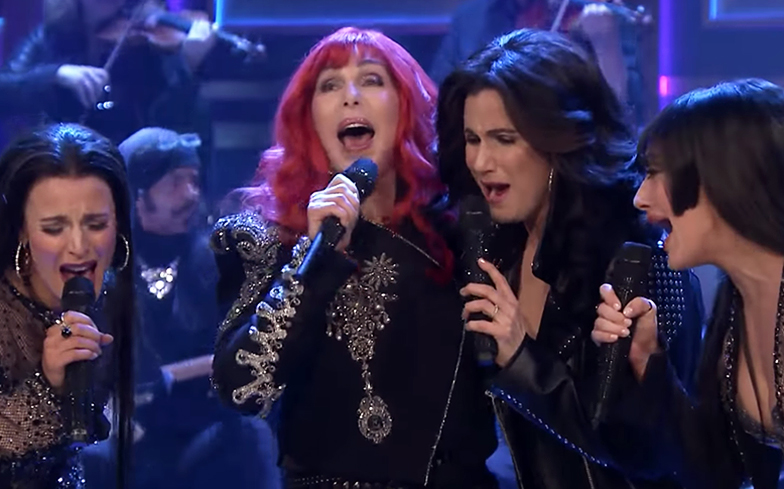 Cher’s still got it!

The goddess of pop stopped by The Tonight Show with Jimmy Fallon to deliver an epic performance of her signature 1989 hit If I Could Turn Back Time, and it was everything we wanted and more.

She was accompanied by Stephanie J Block, Teal Wicks and Micaela Diamond, the three actresses who play Cher at different points in her life in The Cher Show, which debuted on Broadway last year.

2018 was a massive year for Cher. The legendary artist re-entered the pubic conscience with a brilliant appearance in Mamma Mia! Here We Go Again, an equally brilliant new album full of ABBA covers, and of course The Cher Show.

But this icon’s not stopping there, as she recently announced on Twitter that she’s currently writing her life story for a book due for release in early 2020 – and a biopic will be following shortly after.

If you just can’t wait until 2020 for your next Cher fix, you’ll want to get your hands on tickets to her first UK tour in 14 years, which are on sale now. The legendary pop icon will play hits from her back catalogue, as well as songs from her recent ABBA covers album Dancing Queen.

“I’m very excited to bring this show to the UK,” Cher said in a statement. “It was the first country to embrace Sonny & Cher, and it’s where we created and had our first success with Believe. It’s really my second home.”

Cher recently teased the release of a follow-up album of ABBA covers by tweeting suggestions to include on her dream tracklist.