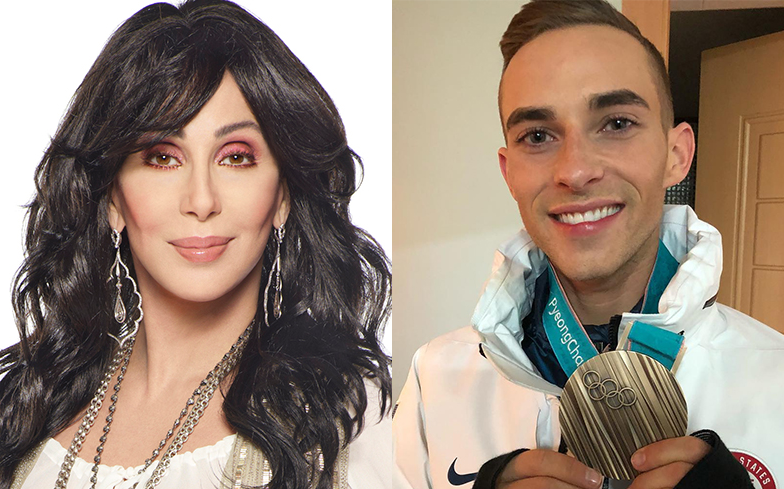 “Adam Rippon is different. He isn’t just a beautiful skater. He has humility, grace and an incredible sense of humor.”

The pop music icon wrote a piece for the American magazine, in which she described the star as “special” and “brave”.

“All figure skaters are beautiful, but Adam Rippon is different. He isn’t just a beautiful skater. He has humility, grace and an incredible sense of humor,” she said.

“You could see in the leather-harness suit he wore to the Academy Awards that he isn’t afraid to take chances. It wasn’t about the suit, really. It was about the fact that he dares to be different in a world where being different always comes with a cost. I thought it was fabulous, of course.”

Cher applauded Adam for being unapologetically queer, and commented on his status as a role model for LGBTQ youth.

“Adam is a skater who happens to be gay, and that represents something wonderful to young people. When I was young, I had no role models—everyone looked like Sandra Dee and Doris Day. There was nobody who made me think, Oh, I could be like them. They represent me.”

She added: “Adam shows people that if you put blood, sweat and tears into what you’re doing, you can achieve something that’s special. You can be special. And I think that’s very brave.

Like Cher, fellow out athlete Gus Kenworthy – who formed a close bond with Adam during the Winter Olympics – had nothing but praise for Adam in our April issue.

“He’s so funny and quick and witty and charming and he’s done so much for the community just by being himself,” he said.

“It was an honour to present the award to him and I think I’ve made a lifelong friend in Adam Rippon.”

The 28-year-old, who won a bronze medal at the Winter Olympics earlier this year, became the event’s breakout star due to his charisma, uniqueness, nerve, talent and witty, dry sense-of-humour. His stunning figure skating routines and unrelenting sass also helped.