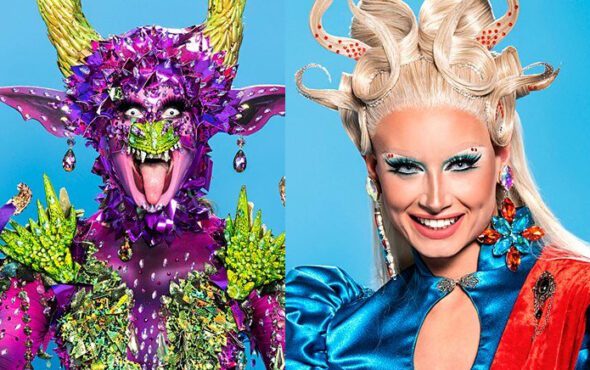 Charity Kase and Scarlett Harlett gossiped about meeting for the first time, their careers and all things Drag Race UK.

In a new video uploaded to Charity’s YouTube on 4 January, which is set to be the launch of a new series by the season three fan favourite, the two had a chat as they transformed each other into Elphaba and Glinda from Wicked.

As the pair praised each other’s drag aesthetics, they revealed that they actually met for the first time several years ago.

In a picture shared by Scarlett that can be seen in the video, the two can be seen looking very different to how they do now – with Charity wearing a pink top and a big blonde wig and Scarlett donning a blue headband and floral dress.

“We both look, I don’t know… new to drag,” Scarlett said as Charity exclaimed she looks “awful” in the image.

“I was trying to do Princess Peach, that’s what I was doing,” the latter explained.

Scarlett responded: “I remember, I remember you had the pink dress the day I met you thinking, ‘Damn, this is a character!’”

“I mean, I’ve grown a lot as a person since then,” Charity reflected.

“Absolutely, absolutely,” Scarlett agreed. “And you know what? I love the fact that you’ve, as you’ve gotten older, you really kind of understand yourself, you know?”

“Oh yeah, for a long period of my life, I gave off so much nervous energy,” Charity told her season three sister. “I’d gone for so long feeling rejected, so when I found this community of people that I felt like, genuinely like, where I belonged, it was kind of me reaching out. But now, I am comfortable with who I am and I don’t have that same nervous energy anymore. But, not until I walked into the Drag Race workroom!”

The two then shared an emotional moment as they discussed their friendship and the fact they ended up on the same season of Drag Race UK together.

“It’s so nice to be on this journey with you to be honest, because our friendship is a lot deeper than what people have seen on TV because they only seen an hour but whereas, we’ve known each other for years and because I’ve known you for so long, it’s so nice to see the journey for you because I’ve seen you go from that nervous little kid to a really confident, talented, amazing, I mean you’ve always been talented but like, you’re so confident and amazing,” Scarlett told her friend in the video.

Swapping looks and chatting drag with my gorgeous sister @scarlettharlett ❤️
Watch the full video on my YouTube! https://t.co/UBDhmTH6Zp pic.twitter.com/OkyES5d0O3

They then revealed that many years ago, they appeared on Big Brother’s Bit on the Side when it “was all drag queens in the audience”.

The queens went on to spill some T about what it was like to get ready for their run on Drag Race UK.

“The best thing that you could’ve done is prepare yourself for the limited time that you have to get ready,” Scarlett said.

The two then joked about the chaos of the first episode, with Charity revealing that she was surprised by the order of the first runway presentation.

Scarlett added: “When everyone walked in, and you were the last one as well, so it was like, petrifying, because when Veronica walked in, and you, and Ella, and all these people, I was like, right, I better be the fucking funny one because I don’t know what else I’ve got going for me here!”

Charity then opened up about what it was like watching herself back on TV and how “delusional” she thinks she was during filming.

Charity continued: “The judges weren’t seeing me and I was giving everything I could, but it wasn’t getting across and I was also getting quite frustrated with that and I kind of wanted to be out of there – I was ready to go.”

Scarlett then told Charity that even though she is proud of what she achieved on the show, she wishes there was just one moment where the judges “were able to live for what you were doing.”

Charity responded: “Yeah, I mean I wish that as well, but you know what? The nice thing is, it’s now out and people do see my art and do value what I do and I appreciate that so much. You’re in your own head with this for so long, keeping a secret, you start doubting what you did – so, seeing it on the TV and hearing the validation, it makes it all feel so much more worthwhile.”

You can watch Charity Kase and Scarlett Harlett’s full video below or by clicking here.