Carlie Hanson is your next pop obsession 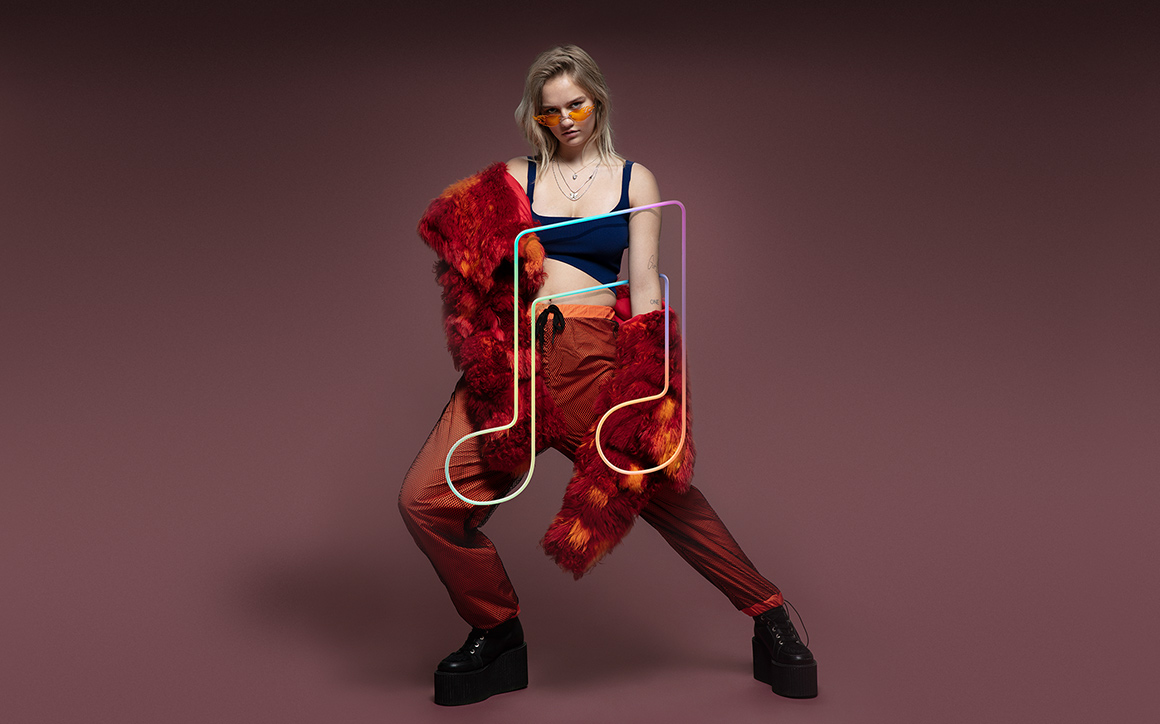 Taylor Swift’s a fan, and you will be too.

In just over two years, Carlie Hanson has become – cliche statement alert! – one to watch in the pop landscape. At just 19-years-old, the American singer-songwriter and skateboarder has toured with queer megastars such as Troye Sivan, Kim Petras and Yungblood, amassed over 70 million streams with her infectious alt-pop anthems and has even been championed on numerous occasions by Taylor Swift. “It’s surreal, I have no words for it,” she tells us of her breakout success (in her distinctive Wisconsin twang). “I have written tattoos for fans and I’ve seen them after. It’s like, ‘Holy shit! You totally have my handwriting on your body for the rest of your life.’ I cannot comprehend that.”

How did her journey start? Well stay tuned, because we’re going to tell you: according to her mum, Carlie first became infected with the performance bug at three-years-old, when she flicked on the telly and came across the music video to Destiny’s Child’s 2000 empowerment anthem Survivor. “I would always sing it. I was always doing shows in my living room to my family,” she recalls. “Ever since I was little, there was nothing else I wanted to do. I was a show-off, the funny one in the group. I always wanted the attention. That never went away!” Although she never pursued any musical endeavours at high school such as choir or theatre, Carlie’s passion for music lived on. She always dreamt of becoming a star, but thanks to her rural upbringing of Onalaska, Wisconsin, Carlie never thought it would become a reality. “It’s the middle of nowhere. It’s Midwest!” she laughs. “There was nothing there to help me do what I wanted to do. Also the high school I went to and the kind of people I was surrounded by weren’t my favourites. It was a prison. I wanted to get out of there. I needed to go somewhere with more… more everything.”

Carlie’s dreams of becoming an international superstar and recording artist skyrocketed after discovering a certain Canadian icon on YouTube: Justin Bieber. “That’s what really captivated me,” says Carlie. “It just stuck with me forever.” She credits his journey, from becoming an internet sensation to one of the most streamed artists in history, as her main motivation to continue pursuing superstardom. Carlie later followed in his footsteps with numerous song covers on YouTube, but unlike Justin, she wasn’t discovered by a Scooter Braun-esque music mogel. She continued to hone her craft, but ultimately found herself flipping burgers at her local McDonald’s. It wasn’t her dream job.

When she was 16, Carlie experienced her very own Ally Maine in A Star Is Born, once in a lifetime movie moment. One day during a casual trip to the mall – whilst browsing Instagram at the same time because duh, that’s life now – she scrolled across a contest held by iHeartRadio. “If you posted a cover of Zayn Malik’s song Pillowtalk, you could win tickets to see him,” she explains. “So me, being a die-hard One Direction and Zayn fan, I said to my friend, ‘We got to go back to the car so I can record this!’” After a few days, iHeartRadio reposted the clip and it quickly went viral. “That was a huge deal for me because I literally had like 100 followers at the time and they had how many? A bunch!” Although she didn’t win the contest, Carlie was scouted by producers and subsequently travelled to Toronto to audition and record demos for House of Wolf. “That’s where it all began.”

After moving to LA in 2017, Carlie made her official music industry debut with the break-up pop anthem Why Did You Lie. It wasn’t until the follow-up single, Only One, that Carlie had a taste of life as a full-blown superstar. The song was recognised by Taylor Swift, who personally added it to a collection of her all-time favourite tracks, and in April 2018 the song was averaging over 400,000 streams per day. Since, it has accumulated over – wait for it – 60 million streams. When we ask Carlie if she expected this level of success, she responds with a scream: “HELL NO! I had no idea what was going to come from that. I think at the time, I had other songs in the bag that I was like, ‘This is gonna blow up. No, this will blow up.’ I had no idea that Only One would be the one to really hit like it did.” With these two bops, Carlie proved she had a knack for writing pop ear-worms with universal lyrics. On the former, she criticises a lover for their lack of effort (relatable), while on the latter she proclaims to be the “only one” who understands them (again, relatable). The sharp lyricism and mainstream pop beats continued with songs such as Us, Mood, Toxins and Numb, firmly establishing Carlie Hanson as an upcoming force in the world of pop.

However, Carlie’s debut EP Junk steered in a different direction – for the better. Released in June of this year, the five-track collection explored alternative rock, pop-rock and teen angst, feeling much like a 2019 reincarnation of Avril Lavigne’s debut album Let Go and Pink’s M!ssundaztood. “I wanted to mess around with the sound of guitars and I really like rock,” she says. “Rock has always been something I’ve gravitated towards and I wanted to mix the two together.” The album’s mid-tempo opener, Bored with You, sees the star longing for a day spent doing bugger-all with a loved one; the 00s-inspired punk-pop number and future wedding staple Back In Your Arms treads on similar territory (the latter was again supported by Taylor Swift). On WYA, Carlie writes a love letter to her future acclaimed, Grammy Award-winning self in which she croons: “Are you happy right now, where you’re at girl? Did the money go straight to your head, girl? Did you grow up a little too fast, girl? Cause if you did, you can always go back, girl.”

WYA serves as a time capsule, so when she’s in her late 20s, she can reminisce and see if she’s still the same ol’ Carlie Hanson from Onalaska, Wisconsin. “I can’t wait to listen to this song however long from now and just see what it feels like,” she states. It appears to be the most personal song on the album, until you get to the closer, Hazel, in which she pleads with her friend – who suffers with depression and mental health issues – to seek help. “Hazel, are you stable? Please pick up the fucking phone,” she sings. “Why you MIA? Don’t want you to be alone if you’re feeling crazy.” For anyone who has suffered with mental health struggles, or know someone who has, Hazel hits hard.

Speaking about the aforementioned topics has always been important for Carlie. When we initially spoke to her last year, she opened up about her own battle with anxiety and recalled message after message from her fans who have personally credited her with helping them through dark periods. She says: “It’s real, and a lot of people – especially this generation – struggle with it, and it needs to be talked about. We need to be able to help each other.” As well as igniting a conversation on mental health with her platform, Carlie aims to change the way we talk about sexuality. She has been frank about her relationships with both men and women, which has led to her being included on queer-centric playlists and categorised into a specific label. But when it comes to her sexuality, Carlie admits that she doesn’t even know how she would label herself and rightfully opines that she shouldn’t have to. “I was seeing a girl recently and I will easily see a beautiful boy on the street and be like, ‘Wow, I wanna kiss you.’ Maybe there is no label for what I am. I don’t think there should be.”

Carlie reminisces on a past childhood moment that has always stuck with her. Due to her “tomboy” aesthetic, Carlie once had a classmate ask whether she’s male or female. “I was like, ‘What the fuck? Why does it matter?’ As I’ve gotten older, I’ve realised that is for you to deal with yourself. You don’t need to let anyone else know unless you are confident and you want to let the world know.” Imagine being that switched on in kindergarten? However, Carlie says she feels “so lucky” that we’re having this conversation about labels in such a “free time”; opposed to a time in which her 26-year-old gay sister “felt like she could never be herself”. And over the past few years, we’ve been introduced to a whole new generation of female LGBTQ singer-songwriters who are flying the flag and providing the representation that Carlie and her sister craved in their youth, such as Miley Cyrus, King Princess, Janelle Monae, Hayley Kiyoko and Kehlani.

“If I had all these people when I was younger, I would’ve felt less alone,” says Carlie. “It would’ve helped me because I had so many questions going through my head like, ‘Why am I having feelings for this girl? Is it just because I want to be like her?’ It would’ve been so helpful to have these women to look up to because it’s nice to have someone there, even through a screen, who is going through the same experience.” Now, Carlie is that person. On social media, she is often hailed by her fans as a “queer hero” and the “queer pop princess we all need”, while others joke that Carlie’s music “finally brought out the gay” in them. In just three years, she’s gone from flipping burgers in Wisconsin, to earning a massive radio hit to becoming a beacon of light for not only struggling queer youth, but for youth who feel like they don’t belong. “There are so many people in this world, there’s no way that you’re the only one that’s going through whatever it is you are going through,” she adds. “I think it’s really important to speak up about anything, whether it’s anxiety at school, at work, with yourself, confidence issues… You can’t bottle it up, you’re not going to get anywhere with that.”

So – cliche question alert! – what’s next for Carlie? At the end of November, she will be releasing her brand spanking new single, Side Effects, an explosive pop-rock anthem on how you “can’t contain your feelings” in a new relationship. It will be followed by one more single and another EP – with the release TBA (sorry if you were looking for an exclusive). After, she finally plans to release that long-awaited debut album. “I want to drop it as soon as possible!” Carlie says in a burst of excitement. If it continues to break boundaries like her previous work, then we see a bright future for Carlie Hanson.

Carlie Hanson is the third artist to be featured as part of a new collaboration between GAY TIMES and Apple Music called Elevate; a campaign to support and platform LGBTQ music talent as they break through into the mainstream.