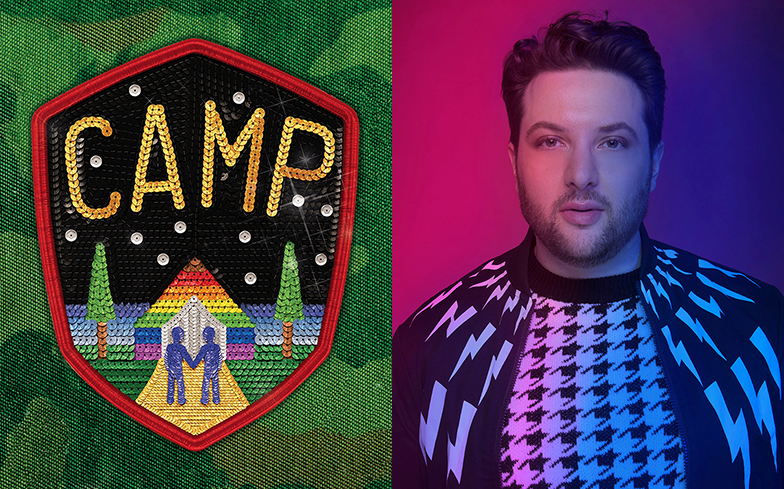 From the author of the acclaimed Jack of Hearts (which we called one of the most important queer novels of the decade… and it was) comes another YA story that blends romance, comedy and Rosen’s signature wit to tackle toxic masculinity and the idea of being ‘masc4masc’ in the gay community.

The novel follows 16-year-old Randy as he falls for Hudson, who’s only into ‘straight-acting’ guys, at a camp for queer teens. Randy decides to reinvent himself in Hudson’s masculine image, ditching the musical theatre and nail polish, and the two eventually grow close – but is it really love if he’s not being true to himself?

“Hudson is very much this masc4masc character, and as we go along we see that it definitely comes from this place of fear,” says Rosen. “It’s something I saw a lot growing up, this idea that he’s the ‘special gay’ – that’s when a family member or loved ones are essentially telling you, ‘I don’t mind you being gay because you’re not like those other gays’.

“That sort of homophobia often doesn’t look like homophobia. We’re trained to view homophobia as violent in some way, and I think that it can actually be much more sneaky than that. So Hudson has this feeling that every part of him that doesn’t conform to a queer stereotype is what makes him worthy of love.”

We spoke to Rosen about the message he wants to send with Camp, the role of the patriarchy in creating and upholding the ‘masc4masc’ phenomenon in the gay community, and the upcoming movie adaptation that’s heading to HBO Max.

Where did the inspiration for CAMP come from?
I wanted to write a really fun, sweet romantic comedy. The inspiration was those 1960s Doris Day and Rock Hudson comedies, I wanted that vibe but to put it in a contemporary, queer young adult novel. But once I realised that the best way to translate that idea was to make the battle of the sexes the battle of the gender presentations, that’s when it became this moment where I was like, ‘Okay, let’s talk about masc4masc culture, the way queer people police each other on behalf of straight people, the way that we can sometimes end up being really subservient to patriarchal values instead of casting them off.’

Why do you think this ‘masc4masc’ culture is so prevalent in the gay community?
Essentially, it’s all about this patriarchal idea that masculinity has value over femininity, or even that masculinity and femininity have meaning to them, as opposed to just, ‘That’s how this person acts, that’s how that person acts’, we’ve assigned behavioural traits to the sexes, and then because of the patriarchy we’ve said, ‘We associate these traits with men, therefore these traits are superior’. And I think a lot of gay men can really internalise that as a way of dealing with feeling like an outsider when they know they’re queer. I feel like once you realise you’re gay, you can go one of two ways – and this is extremely lacking in nuance, obviously – but you can either go, ‘Okay, this removes me from the patriarchy and therefore none of that crap applies to me and I’m gonna smash it with a hammer’, or you can be like, ‘Well, I don’t conform to the patriarchy in that my desires are different, so I’m going to do my best to conform in every other way to make up for that’. That’s the ‘I am masc’ aspect, but then there’s the ‘I want masc’ aspect, and that has to do with the way we define male attractiveness – and again that goes back to the patriarchy, but I think if you are already someone who is saying, ‘I’ve gotta conform to the patriarchy so that my sexuality doesn’t make me less-than’, then you are going to want someone else who also conforms to the patriarchy because it’s safer. I think masc4masc culture is a form of hiding, really.

This whole concept of being straight acting or ‘masc4masc’, is that something you’ve ever felt the need to adhere to?
When I first came out as a freshman at high school, I definitely was one of those people who said, ‘I’m queer, but I’m not going to let that define me under any circumstances’, so I ran as far away from the stereotypes as I could and looked down on those people. Hudson is very much this masc4masc character, and as we go along we see that it definitely comes from this place of fear. It’s something I saw a lot growing up, this idea that he’s the ‘special gay’ – that’s when a family member or loved ones are essentially telling you, ‘I don’t mind you being gay because you’re not like those other gays’ – it’s this reassuring thing, and that sort of homophobia often doesn’t look like homophobia. We’re trained to view homophobia as violent in some way, and I think that it can actually be much more sneaky than that. So Hudson has this feeling that every part of him that doesn’t conform to a queer stereotype is what makes him worthy of love, and what makes him unique. The moments he’s drifted into gender nonconformity, his parents have essentially punished him for it. So I wanted to explore that, and show that there are ways to cast that off. I really wanted to interact with this idea that there are people out there who genuinely believe that behaving in a certain way when they’re queer is what makes them ‘special’ and better than other queer people and how that invariably comes from the straight people around them.

A lot of ‘straight-acting’ gay people will argue that they’re not acting, that’s really just who they are and that’s what they’re into. Do you think that can ever be true? Or is there always an element of pretending going on?
This is one of those things that gets complicated because it’s so subjective. What’s ‘straight-acting’ to me might not be ‘straight-acting’ to you. I’m assuming you’re aware of the stereotypes over here, a lot of Americans think all British men are ‘gay-acting’ and that’s just because anyone who dresses well or is well-mannered is considered ‘gay-acting’ in America. So it’s very subjective. But I think there absolutely are people who are just being themselves and do not care and come across as ‘straight-acting’, and I put them in the book. Brad is an example of that. He genuinely doesn’t care, he’s a jock but he’s queer and when the guy he’s into wants to put nail polish on him he’s like, ‘Okay, whatever’. Whereas a masc4masc guy and someone who is hiding would be like, ‘No never, you can’t do that to me, you’re taking away my power’. Brad is not someone who would consider himself masc4masc or ‘straight-acting’, he’s just being himself. So when I’m talking about masc4masc people, I’m talking about a very specific mindset, not people who just are a particular way and don’t care about gender identity. It’s the people who care about it and place value on it.

Was the character of Hudson based on Rock Hudson?
His role in the book is, and Randy is from Tony Randall and his last name is Kappelhoff which was Doris Day’s actual birth name, before they changed it for being too Jewish – even though she wasn’t Jewish – so Kappelhoff and Hudson are both homages. Hudson at first is known for being a playboy, every summer he picks a guy, goes after them, has a relationship with the guy and after two weeks ends it and finds a new guy, and of course Randy’s plan isn’t just to win Hudson for two weeks, but to win his love forever and ever. So yeah, that idea of the playboy vibe, that’s very Rock Hudson in those movies.

How important is it to have queer stories, like this one, where coming out isn’t the focus?
I think coming out stories in YA are extremely important, but I think there are numerous gay stories to tell, and coming out isn’t an ending, it’s a beginning. The post-coming out stories are something we’re seeing a lot more of, and I’m thrilled about that, because being in the world as a queer person comes with its own set of challenges, and those challenges are beyond just coming out. I think we need to explore that, especially for teens, as more and more teens are coming out earlier now, you want to make sure they’re not just reading stories about coming out and then everything is great. You want to prepare them for what comes after that, because it’s not all sunshine and rainbows.

It’s so cool that the book has been picked up by HBO to become a movie – is there anything you can tell us about that?
It is very cool! I can tell you that Kit Williamson, who created and starred in Eastsiders, is writing the screenplay. Dan Jinks, who produced Milk and American Beauty, is the producer. Working with them has been extraordinary, they’re amazing and they have such strong visions for this book. Dan was the one who I met first, he brought everyone together and he was just like, ‘Here’s my idea, here’s how it’s going to work, I want it to be straight to streaming’, and his vision was exactly what I thought was right. And Kit, we’ve had a lot of conversations about queering culture and the ways queerness is expressed in culture, and he is just brilliant and we are 100% on the same wavelength in terms of what we need to be doing. I’m very excited for it.

There is of course a big debate about the importance of queer roles going to queer actors, is that something you’ve pushed for with this?
That is one of the things I’ve spoken to them about. It’s difficult because we’re talking about casting actual teenagers, a lot of them aren’t out and you can’t actually ask someone their sexuality when they’re auditioning because that’s not just tacky, but illegal. So I don’t know what’s going to happen withe teenagers, but I told them that it’s important to me that we have queer actors for the adult roles, and they agreed. For the councillors, for Mark especially, we definitely wanted queer actors.

What impact do you hope this book has on the world?
As a writer, the thing we really hope more than anything is that someone will read it and they will enjoy it. That is my minimum, and I would love that, especially now. It’s a summer without a summer, you know? We’re all stuck inside, and queer teens especially, some of them are quarantining with their straight parents and they’ve lost access to queer communities they usually see on a regular basis, and I really want this book to get to a lot of them so they can have this queer summer, they can have a summer romance at least in this book form, because they aren’t gonna get it in the real world right now. I’m hoping this book becomes a nice little escapist fantasy for a lot of queer kids right now. But, you know, beyond that it would be lovely if this book really made people think about the way they interact with the patriarchy and with gendered behaviour, and the way they define themselves and their desires through the lens of gender and gender presentation. I hope it helps people love themselves a little bit more.

CAMP is out now and available to purchase here.