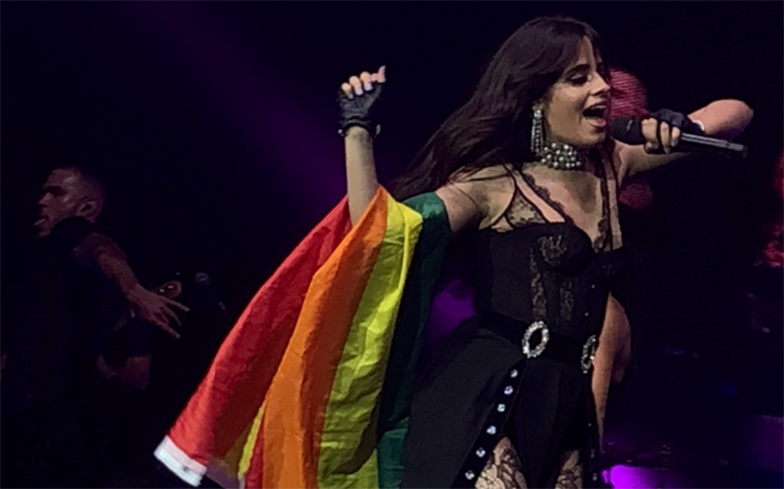 Camila supported her LGBTQ fans and wished them a “Happy Pride” during her show in Brixton.

The 21-year-old twirled with the rainbow flag as she performed the dance-pop track Into It, taken from her critically-acclaimed self-titled debut.

She also projected images of the Women’s and Immigration Marches, telling the crowd: “United by the thing that we love most, which is music”.

After the performance, fans were quick to express their love for the American star on social media, especially Twitter.

“I never knew how much I needed Camila Cabello with pride flag on stage until now!” said one fan, while another said “Camila holding the LGTBQ+ flag is one of my favorites things ever.”

See the best reactions below:

Camila holding the LGTBQ+ flag is one of my favorites things ever.

Camila perform into it with LGBT flag is every I didn't know I needed https://t.co/v7Vhnsq8UJ

I genuinely love it so much that everytime for into it camila has a pride flag ughhh this is EVERYTHING.

🌈 Camila Cabello twirling the Pride flag to confirmed bop ‘Into It’ is my mood all month tbh pic.twitter.com/g1voG9FHh0

i never knew how much i needed @camila_cabello with pride flag on stage until now!!! #NBTSTourLondon pic.twitter.com/ospa6WP4X4

Last year, Camila’s debut album received highly positive reviews upon release, and debuted at number one on the US Billboard 200 – where it has been certified platinum. It also peaked in the top ten of 25 other countries, including the UK, Australia, France and Germany.

Its lead single, Havana, became an international success, reaching number one in Australia, Brazil, Canada, France, Hungary, Ireland, Israel, Mexico, Scotland, the United Kingdom, and the United States. It has also been streamed over 900 million times.

Watch the video for its follow-up, Never Be the Same (also a worldwide top ten hit) below: