Call Me Loop: Let us introduce you to our favourite new pop girl tipped for big things 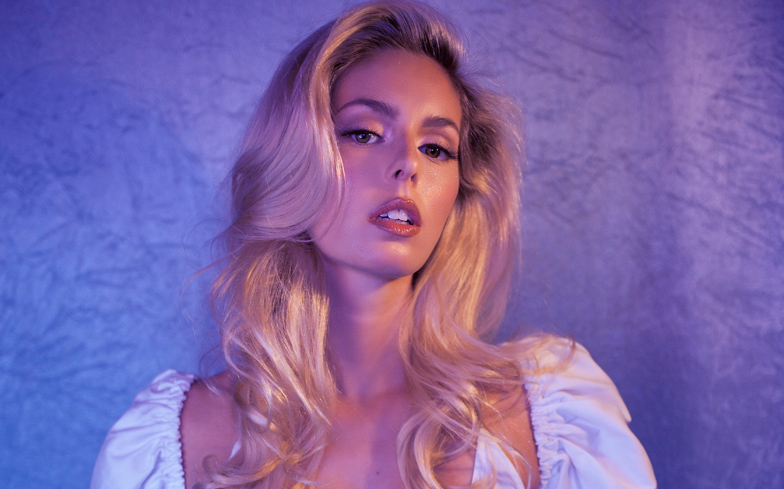 It’s a chilly winter morning in London when we meet up with rising singer-songwriter Call Me Loop, who rocks up wearing a new Ellesse shell suit – the kind only someone with a great look could pull off and do so with effortless style.

Loop – whose real name is Georgia – has just released her latest single Business; a bouncy pop bop detailing her habit of stalking an ex online following a break up. We’ve all done it at some point. It came after a run of great singles, which saw her grow from strength to strength as a British talent to keep an eye on.

A few weeks later and she’s unleashed her new single Silly Boy – an infectious track primed for heavy rotation that will lead into her new EP in February titled Drama.

We sat down with Loop (over a mango and tumeric smoothie no less) to discuss her online stalking tactics, why playing to a gay crowd is unequivocally the best, and to figure just how much of a Christina Aguilera stan she really is.

First of all, congratulations on your new single Silly Boy! What’s the story behind the song?
Thanks! I wrote it after getting ‘dumped’ from a non-relationship relationship. You know those ones where they’re supposed to stay casual but then suddenly you realise it’s not casual at all anymore and the person who was desperate for it to stay casual freaks out and ends it? I was pretty gutted at the time but when I went in to write about it I ended up focusing more on my frustration at the guy’s immaturity and making it a bit more fun/tongue-in-cheek/maybe a bit condescending. At that point I also didn’t really think it was actually the end, hence me backing myself that he’d come back ‘begging at my feet’ (Spoiler – he didn’t. Awkward for me). But yeah it was the end and I got over it, cos I guess you can’t really ever be that sad about something that never properly started in the first place.

It has been lifted from your new EP called Drama, which we can’t wait for. What can fans expect from the collection?
Me neither! So excited to release a body of work for fans to get stuck into. It’s got a nice bit of variety on there to be honest, but as you can imagine, every song is about ongoing boy ‘drama’. Business and Silly Boy you’ve heard. Body Like Yours is more of a Give n Take vibe so hopefully fans of that’ll appreciate it. Drama is just me being my typical self-sabotaging self, complaining that things are going too swimmingly (and thus boringly) in my life and me just begging for someone to come along and mess it all up. And Association is a sassy ass song about putting someone back in their place. That’s the oldest song on the EP – I think I wrote it start of 2018 – but it’s a real favourite when I play live so I’m excited for fans to hear it in record form finally. Overall I just hope it’ll give everyone a deeper insight into me as a writer and hopefully resonate with listeners, making them feel empowered and like they wanna dance around their bedrooms.

You’ve just mentioned your previous single Business, which centres on a story I think we can all relate to – especially in the age of social media. How difficult was it for you confronting those feelings and putting it into a song?
It wasn’t hard to be honest. I’m such an oversharer – I have no filter. I tell everybody too much anyway. The only thing with it is that when you write something in a session you feel totally safe and say whatever, but when it comes to the point where people are like, ‘This is probably going to be your next single’ you’re like, ‘Oh everyone else is going to hear it, and that person is going to know it’s about them.’ I wrote it nine months ago and I’m not feeling the same way anymore. All of my songs are super personal, and they have to be about what I’m going through otherwise I just don’t find the words. But yeah, there are two types of people: those who stalk, and people who just shut off and block their ex. I’m definitely the first type – I find it really hard to get closure.

So what’s your top stalking tactic on social media then?
I guess the obvious one is having a fake profile isn’t it! I’m not going to admit to that… I might have one, I might not. You just have to make sure you never like photos, that’s the panic. You have to have very dexterous fingers to avoid the accidental double tap. Well yes. I’ve had it occasionally where I see a like has popped up but then you go on to your notifications and it’s gone, but you still know they’ve done it. So even if you get rid of it immediately they can still find out.

So you’ve just said that you’re an oversharer, but do you ever worry about sharing too much in your songs? Have you ever had to go back and change something?
I’ve never gone back and changed anything, but yeah, there has been a bit of… If I’m with a guy and writing about that person and you’re still with with him and there’s talk about the song coming out, you are a bit like, ‘That could really ruin our relationship.’ I’ve not had that yet, but I think there may be a time when that happens. I’ve played songs to my friends before and they’re like, ‘You’ve got to cut this out’. But usually it’s the case that songs take a little while to come out, and then I think it’s OK because you and the person you’ve written about are past that point. They won’t care anymore.

It sounds like you’ve been working on lots of new music, so is this all leading to a debut album soon?
So at the moment I’m going into sessions without a body of work in mind. I have a new EP coming out in February which will have five songs out in one go. But from there it will definitely go back into just single releases for the short term until the end of next year. I will then be wanting to put an album together.

Well starting out as a new artist these days comes with all sorts of challenges, so which is the one you’ve found hardest to navigate?
Social media is tough. It’s now so important because record labels look at it, brands look at it if they want to work with you, and as a new artist you are really not making money through music for a long time. It’s going to be from brand deals and stuff like that. When you’re gigging it’s costing you money – it’s the investment period really when you’re starting out. They all look at your Instagram number, and unless you manage to do a big tour support it’s really quite hard to bump those numbers up. It’s a tough time at the moment to do that. You can get obsessed with it. You just need to focus on not letting it take over your brain! So your stage name Call Me Loop comes from your mother’s nickname for you, which is Loopy Lou. Did she give you that because you were a hit of a bonkers child?
A couple of producers have said that to me! I’ll be bouncing around and they’ll be like, ‘Are you called Loopy because you’re nuts?!’ But no, I actually don’t know how she came up with Loopy Lou. I mean, I can be a bit nuts. I get very hyper, but I don’t know where Loopy stems from. I’ve been Loop to my mum since I was 16, but now I respond to it a lot because everyone calls it me in the industry. I’m a bit crazy, but the right level of crazy. Well that’s what all good pop stars should be. You’ve got to be a bit mad to be in this industry I suppose.

The gays are always the first to sign up when there’s a new pop girl on the scene, so have you felt that love from the community yet?
I have yeah, and it’s amazing. When I released Give & Take is when I really noticed that gay fanbase. I think it was just the lyric. I was getting DMs being like, ‘Oh my god, this is my boyfriend too.’ That’s when I started to have more of those kind of chats with people. I’ve had amazing support from the LGBTQ community in 2018. I think the majority of my fans at my show in November were gay. I’d love to play at G-A-Y.

I know I’m biased but I imagine the gay fans are probably the best audience members?
Yep, they are! They are so fucking enthusiastic and know every single word. It’s just so much fun. That was probably one of the best nights of my life. You are also a big Christina Aguilera stan. Oh I love her.
What is it about her that has inspired you as an artist? When I was younger – I love Britney obviously – but with Christina, because she had the voice and I was a singer foremost, I just heard it and was like, ‘Oh. My. God.’ I would listen to her songs and emulate the way she sang. I think it helped me hone the way I do sing. She has an amazing range, but her lower end is very strong, raspy and soulful, and that kind of suited me. Her songs were empowering, and she was sexy. When I heard Beautiful I was hooked, and that Stripped album was on repeat. I really want to go as her in the Dirrty video for Halloween, but I don’t think anyone could outdo Kylie Jenner. She literally looked the spitting image.

Another big pop star you are a fan of is Rihanna, so I’m going to put you on the spot and ask which of her songs would you take as your own if you could?
Oh God! There are so many. It’s a very difficult question. I love all of them. Even Breakin’ Dishes. Aesthetically I loved her Loud era with the red hair. This is so hard. I’m taking this very seriously.

It’s a serious question.
I actually can’t choose. Don’t say you’re going to ask me another one of these for Christina Aguilera?

No, just Rihanna.
Shut Up and Drive… No! I’m just going to go with Don’t Stop The Music. I feel like that was a moment for her, and it’s got the MJ sample in it.