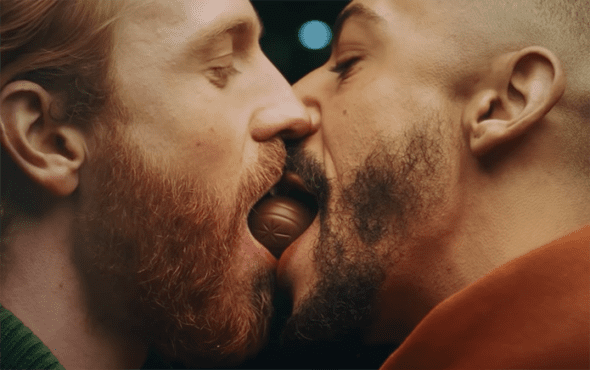 “We can get with that”

In the new advert, we see the different type of Cadbury egg eaters that includes lickers, dippers, discrEATers and bakers.

But what made the commercial even more special is their inclusion of a gay couple for their sharer’s section.

The video shows the real-life couple, Callum Sterling and Dale K Moran spinning around a rooftop, which then leads to the two sharing a Cadbury egg mid-kiss.

We have to stan this representation!

Dale took to Instagram to Instagram to share his excitement about the commercial stating: “Thank you to @cadburyuk for making such a progressive statement and having me and @callumsterling be apart of that vision. We are the future 🌈✨”

Callum has also shared stories from friends praising the two creatives and the inclusive commercial.

Since the release of the advert, fans have taken to Twitter to praise the inclusion.

This is Cadbury’s Creme Egg advert this year and I am HERE FOR IT. pic.twitter.com/W7aIL9208P

Another user stated: “A nice bit of inclusivity, from the folks at Cadbury!”

I mean… the new Cadbury’s Creme Egg ad really went for it! pic.twitter.com/3QMIZ8tYze

LGBTQ+ representation in big brand adverts has steadily risen over the years.

Campbells, Colgate, Starbucks, Absolut, and Coke have all released ads that have beautifully captured LGBTQ+ people, their relationships, and their happiness.

Watch the full advert below!