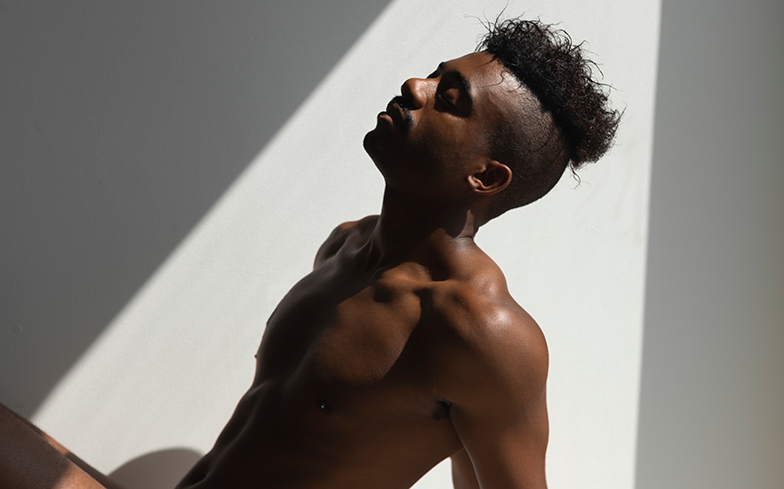 “I think it’s important to discuss our perspectives as much as possible, like gay sex and dancing with a guy at the club – it should be normalised.”

The up-and-coming queer artist has released four bops so far: Leave Together, Pressure, Secrets and the Rick Astley cover Never Gonna Give You Up, but Bronze’s latest release feels like he’s OFFICIALLY arrived.

To commemorate Want 2’s release, we caught up with Bronze and discussed his artistry, his love for Gwen Stefani’s iconic debut album Love. Angel. Music. Baby, and how the tragic events of Orlando helped shape him as a queer musician.

How did you get into music?
I’ve been singing since I was like, honestly, like a child. I kinda started getting into recording when I was 14, just making my own little demos and things. I actually got started because I connected with a gay who was an EDM producer, and then I was like, ‘This isn’t really me.’ So I started really getting into my roots, which is like pop music, because I’ve always been inspired by acts like Pussycat Dolls, Gwen Stefani, Nelly Furtado, and my first ever album was Love. Angel. Music. Baby by Gwen so I was a pop girl from birth.

That is one of my favourite albums of all time, no joke.
It is actually so incredible. I’m so happy you love that album. What You Waiting For, Rich Girl, Hollaback Girl, Cool… and their videos. Like, c’mon.
The visuals are incredible, and the ending of Long Way to Go is so incredible. She’s still a legend to this day. So I was singing forever, and I did musical theatre in high school, stuff like that. But I really got serious about my efforts with recording music in around 2014, and I’ve been doing it ever since. I’ve been Bronze Avery for like a year, I was under a completely different name when I started, which is Gabriel Brown, my real name. I have inspirations from every style you could imagine, like I listen to the Dirty Projectors, Fleetwood Mac, and I also love Post Malone and Travis Scott, and Charli XCX, so my musical influences are all over the place, which kinda reflects why I do pop music, because pop music is one of the only genres that incorporates styles from everywhere else.

Growing up, did you have any LGBTQ icons?
I love George Michael. Like, George Michael is everything to me. The reality was, there wasn’t that many growing up. I’m honestly, for the first time, seeing people who I think will be LGBTQ icons forever. The only out gay singer I knew of in high school was Simon Curtis, and he was a songwriter who did really interesting, electopop music. He was the only one I ever knew of.

You new single, Want 2, is out today. Can you tell me the story behind it?
I actually wrote it with one of my closest friends, who’s also a musician, her name is Emily Vaughan. We had been friends for years at this point, and we would always guide each other through our boy problems and things like that, so when we meet we always go to Chili’s, eat chips and talk about boys. So when she came to Orlando, we did a sesh together because it had been years, and on the way there she told me a story about her current boyfriend now and how they were flirting together at a bar, how she was friends with him for a while, and how she didn’t know what was going to happen between them. So, all my music, when I look back at it, is about sex [laughs]. The best way I would describe myself now would be bedroom sheets meets the dance floor, because they’re all sexy songs but super danceable. I always like to keep things uptempo. So we went into the studio with the mindset of doing a song with a vibe like Cigarette by Mabel, and it ended up turning out completely different but… So it’s just a really sexy, flirty song that you’d be expecting two people to be dancing to on the dance floor… very dirty.

You’ve released five singles so far. Can we expect an EP in the future?
My plans are still single to single because I love how fast I can do things without the pressure of a project. With a project, I probably wanna get a label behind it so I can have more funding. But I’m really enjoying doing single to single because I can hear what the fans say about each song, and tailor it to what I’m feeling and also what they’re wanting. That’s something I’ve always admired about Charli XCX and her music, because she does things so quickly, and really converses with her audience. I really like that because I like being able to talk to people about my art and get different perspectives on it.

Is it important to tell your own story through your music?
I feel 50/50 about this. I think it’s important to share my perspective when it’s time to share my perspective. For example, there are some songs like Secrets that are totally an autobiography of what was actually going through my life, like I was talking to a guy who wasn’t sure if he was ready to be out-and-proud. Then I have songs like Leave Together, where it’s just a feeling. I don’t feel, as a songwriter, like I have to go through an experience to be able to write about it. The same way JK Rowling doesn’t have to be wizard to write about Harry Potter. You can still write about something really cool when your imagination and creativity takes you to those places. Being gay, I think it’s important to discuss our perspectives as much as possible, like gay sex and dancing with a guy at the club – it should be normalised, so I try to inject it into my songs when i have an opportunity to do so.

Was it important for you to be an openly gay as Bronze Avery?
It changed everything. I wasn’t out for a lot of the beginning of my music, and I don’t think a lot of people were able to connect with me. There’s a certain level of authenticity, and everyone has their own timings as to when it’s right for them, but for me, it personally changed everything. I felt so much more confident in myself. I thought people were understanding my perspective more, and I was able to see that my audience are people just like me, which is amazing. I was out at a club in LA, just the other night, and someone said to me: “You make such good music for people like us!” I was like, ‘Wow, I didn’t realise this was something that could maybe change a lot of different perspectives.’ I was just making music and telling my truth, and I didn’t realise it was impacting other people at all.

You grew up in Orlando. How was your coming out journey?
I always say “letting people in” instead. I always felt like I was letting people into my sexuality. All my friends knew when I was in 8th grade. I guess I was early. My mom didn’t know until I was in 9th grade, and I didn’t even get to tell her. Someone wrote a MySpace bulletin about me and we were all on a shared computer, and she found it, and she was like, ‘What is this?’ I was out with my friends so early, and it was such a blessing and I didn’t realise it because I was able to go through a lot of my natural feelings and be open about them instead of feeling confused or not sure. Something I was always very lucky with was that I was very sure I was gay from a very young age. The same is not for everybody, so I was just extremely lucky that I knew what my truth was. You lived in Orlando during the Pulse massacre. How have the tragic events of that day impacted Orlando’s LGBTQ community?
It completely changed everything for the better. In the weirdest way. I had never seen so many so well connected to our community, and wanted to protect it. It was a target on not just the gay community, but the latin community of Orlando, so it was a huge detriment. Everybody got together and really bonded. Orlando’s always been a very nice progressive dot in Florida, which is mainly not very progressive. So after the Pulse tragedy, it was really beautiful to see everybody come together. Our police chief is very supportive with the gay community. It was something that was meant to tear us down as a community and a city, and I actually think it brought us together.

How did it affect you as a person and an artist?
I have it written down in my journal as the worst day of my life. I wasn’t even in Orlando at the time, I was in Nashville. I couldn’t focus all day, I couldn’t think about anything else because that was not just somewhere I went often, but it was my favourite place. It was the first gay club I had ever gone to, and also the first club I went to as well. I had a lot of special memories with my friends there, so it was extremely difficult. This happened before I was even Bronze Avery, which was another motivation. Life is too short to not be out within my music. There are so many people that can really benefit from this. I can be out to my friends, but being out to the media and to the world is a totally different story. There’s nobody you can literally hide from. I think it was definitely inspiring for me as an artist to live my truth. It’s such a baffling time to live in America. I remember growing up, they teach you that America is the best place in the world, and I still think America is great and has a lot of promise. But as I get older, I realise the importance of being involved and doing simple things like registering to vote and making sure my voice is heard. Growing up, I was like, ‘Someone will do it, somebody will speak out.’ Now, as I’m getting older, I’m realising that I’m the person who needs to speak out and I’m the person who needs to say something and say things are not okay with our current political climate.

Do you think it’s important for artists with big platforms to speak out about issues?
Yeah, I was just having a really long conversation about this actually. I think that it is not required for an artist to speak out. If Taylor Swift never decided that she wanted to come out with her political views, I think that would’ve been totally okay because as an artist, we are put on blast all the time. A lot of our lives are not private. And sometimes, you’re not sure of your ideas. But I do think when artists are confident in their views, and they do want to speak about it, it can really change everything, in the way how she added so many voters with just an Instagram post. So, it can change lives for the better. On the flip side, I don’t think every celebrity is a great spokesperson. When you are the right speaker, and it’s the right time to do so, that is the perfect time to share your views if you feel comfortable.