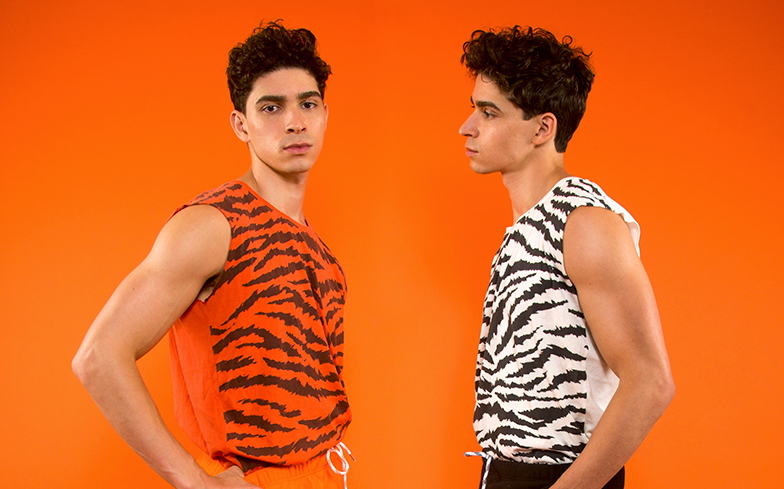 The Broadway baby opens up about his love for the stage, racial identity, and what it means to be mixed in Trump’s America.

Last autumn — just months after graduating from the University of North Carolina School of the Arts — Isaac Cole Powell made his Broadway debut in the Tony Award-winning revival of Once on This Island. This spring he signed with New Pandemics — a modeling agency dedicated to increasing LGBTQ visibility within the fashion industry. And this summer, the 23-year-old New York City transplant from Greensboro, North Carolina appears in season two of the Indie Series Award-winning web series Indoor Boys as he continues to earn his stripes in the concrete jungle he now calls home.

You recently posted an op-ed about ethnicity on Instagram. What prompted that dialogue?
That day I had two people DM me and ask where I was from. Like, “really from.” And that question has always given me pause. It makes me so uncomfortable. It’s not that I’m ashamed of where I come from, or who I am, my discomfort is rooted in the way we try to define other people. As soon as someone knows my racial identity they automatically make assumptions, and I don’t like that.

As someone who grew up in the south, were you ever treated differently by people who knew you were mixed, versus anyone who assumed you were white?
I pass as a white person and am afforded white privilege so I don’t feel like I was ever discriminated against – at least not to my face – and it’s not like I’m trying to pass. These are just the cards I was dealt. So no, I didn’t really experience racism towards myself, but I was privy to it. I encountered a lot of ignorance from people who didn’t know my dad was black and thought they could get away with saying certain things — certain, um, words — around me.

Has passing as white ostracised you at all from certain corners of the black community?
I wouldn’t say ostracise. I’ve certainly felt left out in some ways, but I recognise why. The main defining experience of being black in America is the discrimination that comes along with it. A person’s worldview is molded by the way they are treated. Because I’m not treated the same way as other black people with darker complexions than me, there will always be certain conversations I’m just not able to have.

Representation has been at the root of many conversations in the entertainment industry. What has it been like working on a show with a predominantly black cast?
There was a bit of diversity lacking on my college campus, so joining the Once On This Island cast felt like a homecoming of sorts. I grew up with my dad’s side of the family and really missed being immersed in the culture.

When did you start doing theatre?
When I was twelve. My sister was babysitting these girls who were really involved in the community theatre and they needed more boys in The Wizard of Oz. They taught me a little song and dance and I somehow got up the courage to audition.

What part did you play?
I was a munchkin and I got to wear glitter eyeshadow and eyeliner. I loved it! I was like, ‘Oh my God, I’m wearing makeup and I get to stand in front of people and sing and dance and no one is laughing.’

And then you saw Dorothy’s red heels and you were like, ‘Biiiiiitch! I’m home!’
Basically! It’s actually funny you mention the red heels… when I was three or four, my sister had this pair of red pleather platform sandals that she wore for her fifth grade talent show and I was obsessed with them. I remember taking them from her room and then literally sitting in a closet and wearing them. Did she know you were stealing her shoes?
She did… and so did my parents. They would take them away and hide them, but I would somehow always find them again. It got to a point where all I wanted to do was sit in a dark closet and wear these beautiful red sandals, so eventually my parents got rid of them.

That’s so sad.
Yeah! From an early age, I was taught that femininity was reserved for women, and masculinity for men. My parents really tried pushing me to do sports.

Did that make it harder for you to come out?
I came out when I was sixteen. At that point I was attending a performing arts high school where there were gay people everywhere, so I couldn’t hide as much as I wanted to. Everybody saw me more for who I was and eventually I had to get really honest with myself. It got to a point where I couldn’t maintain having a split personality between my home and school life, pretending to be straight with my family while living my true colors around my friends. It was exhausting. I came out to my family on National Coming Out Day.

How did they respond?
I sent everyone in my family a Facebook message, and my mum read it right away. I didn’t get a call from my dad until a couple months later, but he made sure I knew that he loved me, which I wasn’t expecting at all.

Why is that?
Because my parents are Southern Baptist. My dad is this quintessential southern man. Just strong, hard working, religious, and disciplined. But I remember a little while after that call he came up to my room to ask me all sorts of questions, like did I feel I was born this way, and stuff like that. He was genuinely sweet and compassionate and wanted to make sure I wasn’t being treated badly. He was more concerned about that than anything. Love that he wanted to make sure his son was okay…
He wanted to understand me – and I think he finally does. My sister actually told me that he really does believe I was born this way, that he doesn’t believe it’s a choice.

As an actor, did you ever feel a need to go back in the closet when you started auditioning?
Truthfully, when I got the role in Once on This Island, I sort of panicked. I was cast as a straight leading man and one of my cast members actually took me out and said I might want to think about deleting all of the pictures of my then boyfriend and me, which I actually did. And that caused him a lot of pain.

What made you change your mind about remaining out and proud?
After seeing the hurt I caused my ex, I realised I wasn’t willing to compartmentalise my life like that. I already graduated from doing that in high school and there was no going back. I wanted to live authentically, and if it meant hiding parts of myself in order to be successful I wasn’t really interested. I needed to redefine what success meant to me.

Good. We need more LGBTQ role models like you breaking the mold…
Thank you. So many people have reached out to tell me how much it means to them to see that someone like me, a gay man in 2018, is not limited in his career by his sexuality. I just hope it stays that way.