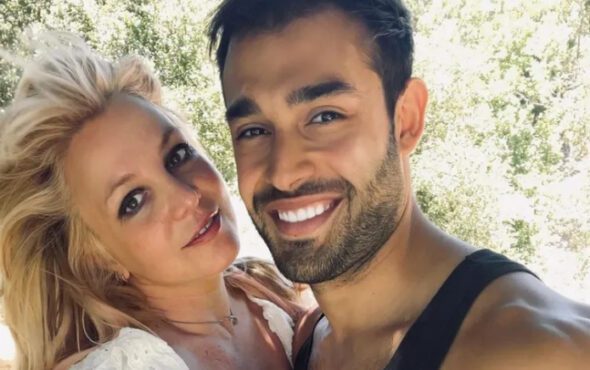 In September 2021, the happy couple announced on social media that they were engaged after nearly six years of dating.

“I can’t f**king believe it,” the Overprotected singer wrote via Instagram alongside a video of her engagement ring.

On 9 June, the two lovebirds finally walked down the aisle during an intimate ceremony in Los Angeles, California.

According to People Magazine, the duo were joined by 60 guests, including A-list stars like Drew Barrymore, Madonna, Paris Hilton and Selena Gomez.

However, her father Jamie Spears, her mother Lynn Spears and her sister Jamie Lynn Spears were not in attendance.

The singer’s two sons, Jayden James and Sean Preston, were also not part of the intimate ceremony.

In a statement, the lawyer of Spears’ ex-husband Kevin Federline gave further insight regarding the boys’ absence.

“Although the boys will not be in attendance, Kevin and the boys are happy for Britney and wish her and Sam all the best going forward,” Mark Vincent Kaplan told Entertainment Weekly.

However, in true wedding fashion, Spears and Asghari’s nuptials encountered a slight setback before the ceremony took place.

According to numerous reports, Spears’ first husband, Jason Alexander, attempted to crash the wedding – which was captured on Instagram Live.

In the video, the 40-year-old could be heard saying, “My first wife, my only wife. I’m her first husband. I’m here to crash the wedding.” Shortly after arriving on the property, Alexander was apprehended by Ventura County police, allowing the ceremony to continue as planned.

Spears and Asghari’s wedding arrives a few days after the latter opened up about choosing the singer’s engagement ring in an interview with GQ.

“I figured with her taste, she wouldn’t want something super big and super celebrity. Celebrities get that million-dollar ring. And usually, it’s free because it’s for promotion, but I want it to represent something,” he told the publication.

Asghari also opened up about the day he proposed to the Toxic singer, stating: “I didn’t tell anybody to be honest with you.”

He continued: “I didn’t want anybody to know and anybody to interfere in any way whatsoever so it was between me and her.”

Congratulations are in order for the happy couple.