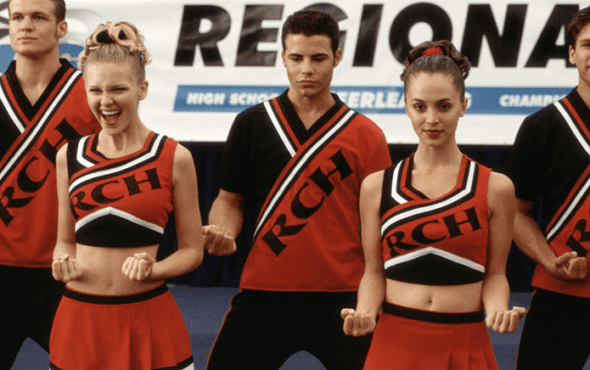 The director of Bring It On says he would rethink the homophobic slurs if he were to make the film today.

In an interview with Insider, Peyton Reed reflected on the teen cheerleading comedy in honour of its 20th anniversary.

The film, which has since achieved cult classic status, follows five-time national cheerleading champions, the Rancho Carne Toros, who discover that their previous captain stole all their best routines from their inner-city school rivals, the East Compton Clovers.

Although Bring It On received critical acclaim for dealing with topics such as race and privilege, it has come under fire in recent years for its use of homophobic slurs in two separate scenes.

Dushku’s character, Missy, says “f*g” as the characters drive to a football game. Later, two homophobic football players use it towards the male cheerleaders, played by Nathan West and Huntley Ritter.

“It was intentional in terms of dealing with the sexuality and the gender politics in the movie,” explained Peyton. “It’s definitely hate speech — it’s intended to be hate speech. The whole idea that Jessica had was kids co-opting language and using it in that way. That was the intent of it.”

Reed, who went on to direct Ant-Man (2015) and its sequel Ant-Man and the Wasp (2018), said if he were to make the film today, “it probably would be approached in a different way,” adding: “A lot of things would.”

When asked if he would return to the franchise if Dunst and Union were involved, Reed revealed that he and Jessica Bendinger, the film’s screenwriter, “still throw around the idea of doing one”.

“At the time I would not have done a sequel, because I wanted to do something else,” he admitted. “But I do often wonder what a theatrical sequel would have looked like. We have talked about doing a 20-years-later thing that becomes a generational cheerleader movie.

In a recent Zoom call with Reed and Bendinger, Dunst and Union shared their ideas for a potential sequel, with the latter saying their characters should be “co-heads of the PTA”.

Dunst added: “Or we run a cheer school like Cheer. Who knows.”