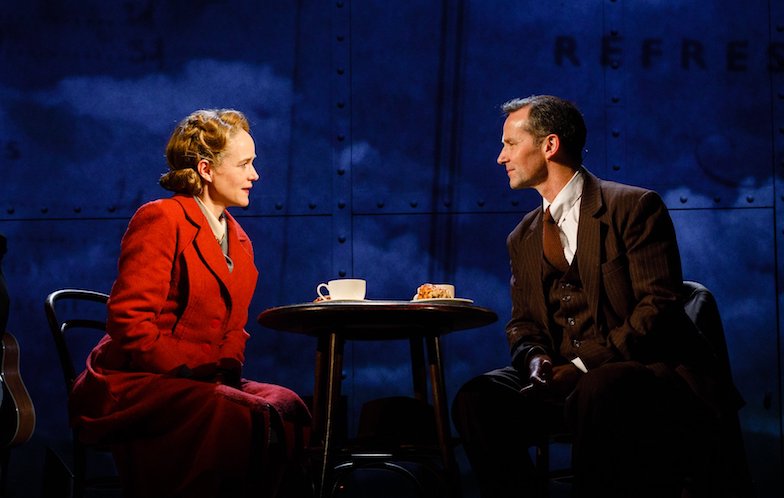 Emma Rice’s adaptation of the 1945 film is an absolute triumph.

This new production, based on Noel Coward’s screenplay for David Lean’s classic film – itself based on Coward’s one-act play Still Life – has opened at the West End’s Empire Cinema. The screen has been adapted into a theatre space, although there are still numerous film elements and projection is used throughout. Set in 1938, it focuses on the fateful meeting at a railway station cafe between Laura, a middle-class housewife, and Alec, a married doctor, telling the tale of their subsequent romantic affair.

This is far from a traditional play – it’s an intriguing and immersive experience. Those who arrive early will be serenaded by the ushers, who will subsequently scamper on to the stage to form the impressive backing band for the show. On numerous occasions the actors come out into the auditorium and – be warned – there is some audience interaction. Those on the front row may be lucky enough to be offered one of the questionably-fresh buns from the station cafe.

It would be impossible to review Brief Encounter without marvelling at the technical excellence of the show. Although most of the ideas are relatively simple, they’re hugely effective and everything just works. The interplay between the on-stage characters and the filmed elements is slick and used sparingly but intelligently. The quality of the music and choreography is superb – again, it’s rarely hugely ambitious, but it all fits together perfectly and is performed admirably. Of particular note is Jos Slovick who does most of the heavy lifting during the songs – he has a genuinely wonderful voice.

Supporting the intense and ultimately heartbreaking main story are a number of other brief encounters and entertaining set-pieces which are much lighter in tone and more amusing, ensuring there are plenty of laughs throughout. We see the cute, comedic young love of Stanley and Beryl, and the slapstick, farcical romance between Myrtle and Albert. Other notable moments include the hilarious dog-walkers encounter, while the chandelier scene is truly a joy to behold.

We’re not going to pretend Brief Encounter is absolutely perfect – for example, we weren’t completely sold on the use of puppetry to portray children, and we’re aware the brand of humour won’t appeal to everyone. Any quibbles we had, however, were incredibly minor and didn’t detract from our enjoyment of the show. Not only is it a unique experience, it’s a smart, slick and charming re-imagining of the classic film – highly recommended.