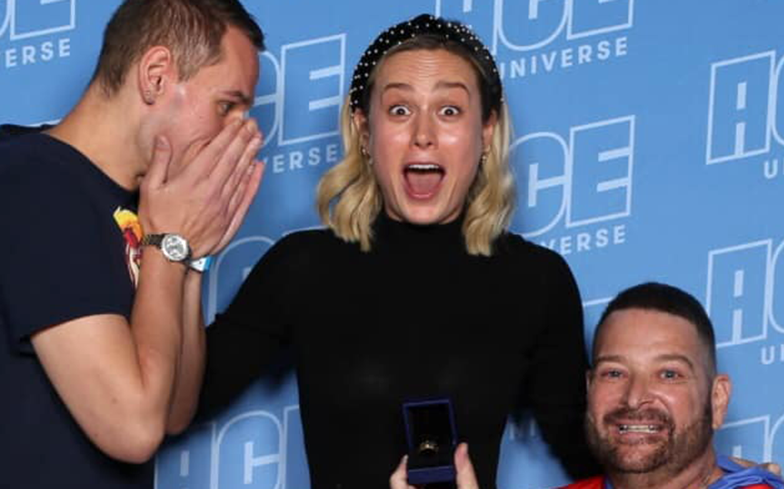 “You’re officially the protector of the gays.”

Brie Larson is the gay icon we all deserve and we won’t hear any different (!!!).

During a meet and greet, the star had a front-row seat to a marriage proposal between two gay men, and it’s gone viral on social media thanks to a series of pictures that capture her hilarious and “wholesome” reaction.

After the post made the rounds on Twitter, the Captain Marvel star congratulated the happy couple, writing: “Y’all I was present for a proposal and I am CHANGED.” It has received over 300,000 likes and 32,000 retweets.

“The way you’re officially the protector of the gays,” said one fan, while another wrote: “Thank you for showing support! It makes being gay easier to know that you got Captain Marvel herself as a supporter! I love you!”

Earlier this year, the star said “gay rights!” when she urged Marvel to “move faster” with representation in their movies.

“I’m happy to be on the forefront of the normalisation of this type of content and to prove once again that representation matters. Diverse storytelling matters, the female experience matters, and these are markers,” she told Variety.

“So it’s something I’ve always known and I think a lot of people always knew, but this is just normalising.”

Later, when the interviewer said he never expected to see a gay superhero on screen while he was growing up, Larson said it broke her heart and stressed that anyone can be a superhero, regardless of sexual orientation.

“That breaks my heart to hear that, because there’s no reason,” she said.

“I don’t understand how you could think that a certain type of person isn’t allowed to be a superhero. So to me it’s like, we gotta move faster. But I’m always wanting to move faster with this stuff.”

Of her character, she added: “It wasn’t enough for me to just look strong on a poster; it needed to extend further than that. I feel like I can’t at the end of the day go to sleep at night if I didn’t do everything that I possibly could.”

Since then, Marvel Studios have announced that several of their upcoming projects will feature LGBTQ characters.

The third Thor sequel, Love and Thunder (2021), will chronicle Tessa Thompson’s character Valkyrie as she searches for her “queen” and The Eternals (2020) will feature a gay man who is married and has “a family”.

The Captain Marvel sequel will also introduce a fan-favourite gay character. According to We Got This Covered, Hulkling – a Kree/Skrull hybrid who possesses shapeshifting abilities and super strength – will make his debut.