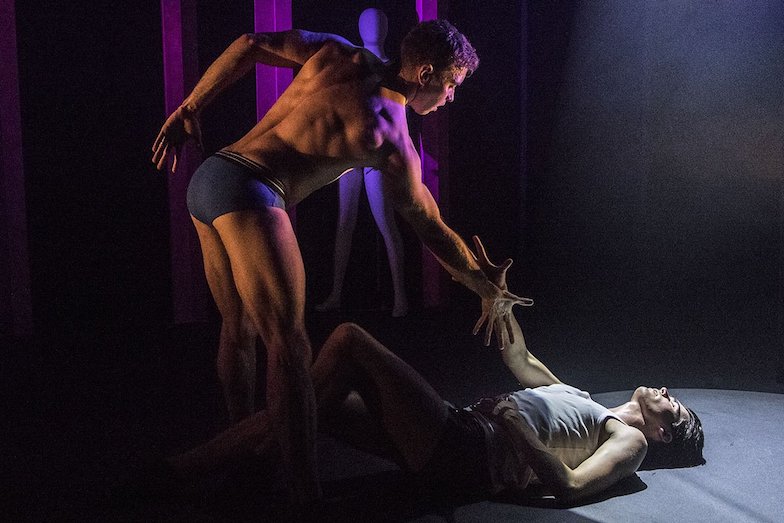 What do you do when your boyfriend is cheating on you…with a mannequin?

Boy Toy is Above The Stag Theatre’s first foray into full-on dance. Conceived, directed, and choreographed by William Spencer, this is a memorable hour of lifts and twirls and leaps that is loosely based upon the classical ballet Coppelia. However this being Above the Stag, there’s also a gay hen-party and plenty of same-sex action.

Saul Kilcullen-Jarvis and Lance Collins are lovers Simon and Freddie. Kilcullen-Jarvis’ lithe and limber frame contrasts beautifully with the more stout and muscular Collins, and the pair have a seductive chemistry as they tangle into one another. There’s a superbly choreographed sex scene that is sensuous enough to come across as scandalous, despite nothing really revealing or carnal taking place on stage at all.

Dance captain Matthew Brazier takes the role of Maxamillian, the best friend. Brazier is a delight to watch, and is particularly adept at slapstick. Callum Tempest is deliciously disturbing as sex-shop proprietor Dr C. Ostensibly the villain of the piece. One can’t help feeling rather sorry for the salesperson as his plans to bring a male mannequin to life go catastrophically awry.

The style is a fusion of ballet and tap, set to a new arrangement of Delibes’ music energetically jazzed up by Musical Director Aaron Clingham. And crucially, the whole piece is completely accessible to anyone, regardless of their level of familiarity with the genre. Anyone visiting London over the Pride season will be able to fully enjoy this silly sexy saga.

Glorious, graceful, and gay-as-you-like, this is hot stuff and an impressive directorial debut from Spencer – we look forward to seeing more of his work. Perhaps the summer dance piece can become a regular fixture in Above the Stag’s calendar?