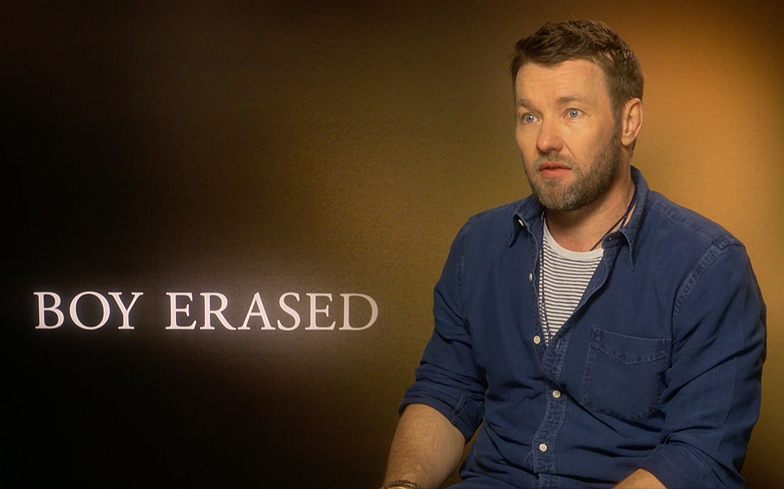 Following its release in the US last year, Boy Erased is finally getting a nationwide rollout in the UK this month.

The film – based on the memoir of Garrard Conley – recounts the author’s experience of being subjected to ‘gay conversion therapy’ after coming out to his religious parents.

Joel Edgerton both directs Boy Erased and stars in the film as the ‘gay conversion’ facility’s leader Victor Sykes, who uses unfounded methods to try and ‘cure’ young people of their homosexuality.

Gay Times recently caught up with the Aussie filmmaker and actor about his research into the practice that is conversion therapy, asking what part of it particularly shocked him.

While Joel was familiar with ‘gay conversion therapy’ as a practice, he was less prepared for the psychological reaction of parents who may not agree with their child’s identity.

“I think what surprised me was parents placing themselves at the centre of coming out,” he explained. “Like in the way that parents see their children as an extension of themselves. So creating and drawing so much of the drama to me and making it about themselves.

Boy Erased has received generally favourable reviews since its release in the US, with Lucas Hedges scoring a Golden Globe nomination for his portrayal of Garrard.

But the social and political impact of a film like Boy Erased could be important as some governments look to make the practice illegal, following years of turning a blind eye to the damage it causes to LGBTQ people.

“The dream would be that Boy Erased becomes one of the big sledgehammers that knocks down the monument of conversion therapy, because it seems like it’s a bit of a pillar that’s there to stay unless people are willing to chip away at its base,” said Joel.

“So if education can help people realise there is nothing honourable about it, then we will have done our part in that.”

He added: “Other than that, I hope it’s a great identifier for young people, and a really great identifier for parents who are maybe going to make decisions that cause the happiness or pain of their child, that is based on the difference between love or lack of acceptance.”

Boy Erased will be in UK cinemas from 8 February.