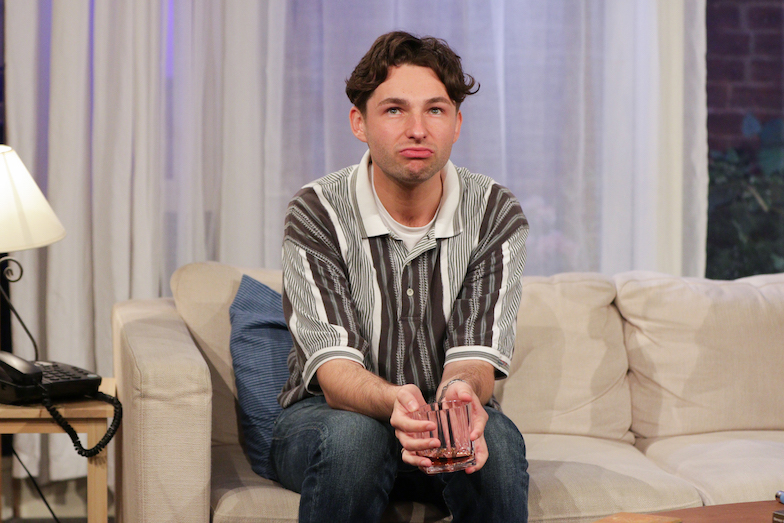 It’s 1995, and Lee’s annual Eurovision bash is a little more subdued this year, having recently lost his boyfriend to a brain tumour – but his guests still provide plenty of colour and conflict.

Are straight couple Nick and Tania really as straight as they seem? What lengths will bitter old queen Steph go to to get his own way? And will awkward Norman from the flat upstairs ever be invited to the party?

This is the latest entry in Above the Stag theatre’s retrospective of the work of celebrated playwright Jonathan Harvey – and it’s an absolute corker. Harvey often explores seemingly tacky and tawdry themes in his work, with a brilliant knack for unearthing the human truth layered beneath the detritus, so naturally Eurovision is a perfect vein for this master of queer theatre to be tapping. This is a piece that veers unapologetically from absurd slapstick to raw tragedy, and is rich and rewarding as a result.

Director Andrew Beckett has assembled a truly superb cast. Sean Huddlestan as Roy is particularly watchable – cleverly crafting a drug-addled twink who also manages to remain an innocent, despite his addiction. Huddlestan’s portrayal of a young man under the influence of ecstasy is thoroughly convincing and one to watch.

Christopher Lane is hilarious as Steph, a larger than life character who can recall complex Eurovision statistics at the drop of a hat. Adam McCoy gives us a very identifiable Lee – the host of the party who’s just doing his best to cope – an excellent portrait of a gay man struggling to keep his head above water.

John Hogg’s Nick is absolutely recognisable as the type of actor who takes himself far too seriously and believes that his bit-part on The Bill makes him a star; very funny and relatable stuff. And Florence Odumosu as his girlfriend Tania is a formidable stage presence to be reckoned with. As Lee’s sister Wendy, Tori Hargreaves is poised and precise, delivering a blisteringly memorable monologue in the second act. And despite only having a couple of scenes, an unrecognisable Joshua Coley gives a show-stealing turn as Norman the upstairs neighbour – grippingly grotesque.

While we’ve very much enjoyed some of Above the Stag’s recent more experimental pieces, it’s refreshing to be back watching a good old-fashioned play, and a superb one at that. This is one of the most solidly entertaining nights out that we’ve had in a good old while. A laugh-a-minute triumph that certainly gets our vote.