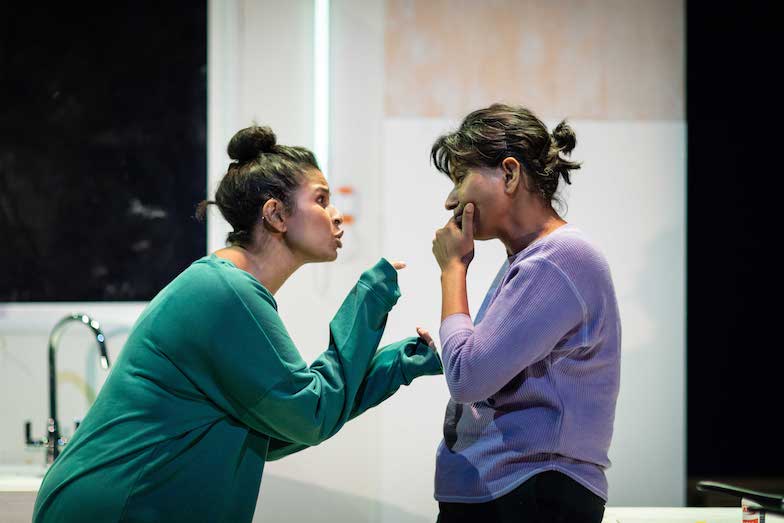 There’s a lot going on in [Blank]. The full play text – a rather daunting-looking tome we were handed upon arrival – weighs in at over 500 pages and contains 100 scenes. Writer Alice Birch has challenged those wishing to stage the play to pick a selection of the unnamed scenes; director Maria Aberg has taken up the gauntlet and constructed a unique and thought-provoking piece of theatre. Fittingly this all-female production marks the 40th anniversary of Clean Break, the reformative theatre company which works with women affected by the criminal justice system; two of its members are in the cast.

The 22 selected scenes are not connected, which is not immediately obvious as the same names reoccur throughout (the actors are using their own names on the stage). It plays out like a series of vignettes, each offering a snapshot into a life full of challenging circumstances. Whether that’s a sex worker on a snowy night choosing to stay out in the cold until she’s earned enough to go home, or a woman breaking into her mother’s house to steal money for drugs – most of the scenes are desperately sad, but injected with enough dark humour to ensure the tone is not relentlessly bleak.

While each episode has its own merits, [Blank] does feel like it lacks unity. It’s telling that the standout scene is by far the longest – a dinner party, reminiscent of the opening of Caryl Churchill’s Top Girls, takes up about a third of the running time, allowing its characters and ideas time to grow and develop. The pretence is that Kate is introducing her new girlfriend Shona to her friends, an insufferable middle-class clique living in a bubble. Shona’s sharp observations and rebellious nature clash with Kate’s friends, who share drugs and mezze platters while bragging about their charity work or paying lip service to the Me Too movement. It’s an entertaining scene with some gripping moments – it’s a shame we only get one like this.

Overall we enjoyed what [Blank] has to offer – this is a skilful production, which looks great unfolding on Rosie Elnile’s clinical set, reminiscent of a series of prison cells stacked on top of each other. Maria Aberg’s selection of scenes offer a handful of insightful observations and there are some strong acting performances to be seen here. Yet it never really feels like this adds up to more than the sum of its parts – it’s a series of intelligent and thought-provoking scenes which lacks a coherent vision.