Bitches Down Under’s a show definitely worth seeing – review 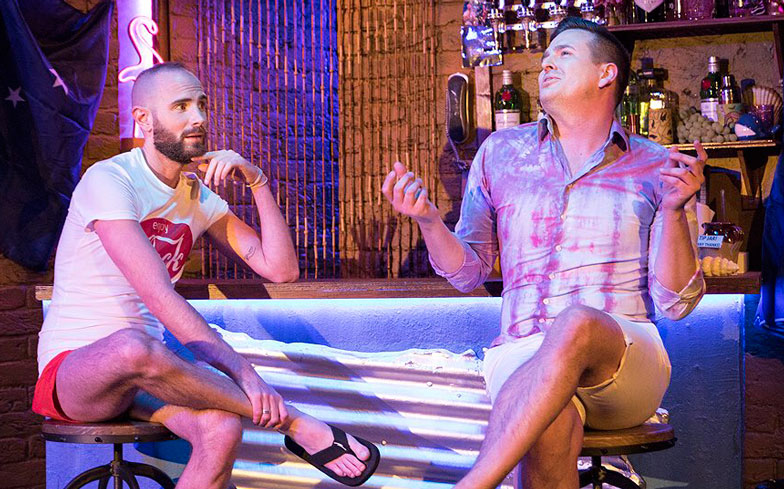 This is the third and final part of a trilogy that’s been running since 2016 – one instalment per year – and we’re happy to say that the wait has definitely been worth it.

Don’t worry, however, if you’ve not seen the previous two Bitches! plays – everything is recapped and explained for a fresh audience as we embark upon this new adventure. Once again we’re treated to a riotous comedy, with the focus far more on character interplay than any intricacies of plot. This time our gaggle of gays have plumped for a vacation Down Under, and there’s no beating around the bush – the gags come thick and fast. (Much like Rent-boy James…).

This Australian episode involves a family reunion, a holiday romance, and a Kylie dressing up night…

The three core characters – whom have featured in all three Bitches! pieces – are on top form, and it’s a pleasure to be reunited with the triumphant triumvirate of Max, Garth, and Pam. Lucas Livesey as Max offers a master-class in stoney-faced deadpan bitchiness, injecting some of the best lines of the show with his unique brand of acid wit.

Related: Call Me By Your Name and RuPaul’s Drag Race score GLAAD nominations

Returning from the 2016 escapade is Grant Cartwright as the divine flame-haired Ollie – a tortured twink who wants more from life than one-night-flings and hook-ups. Cartwright is adorable, and the scene in which he parades around in nothing but a tiny pair of Speedos is hot enough to have us reaching for a fire-extinguisher…

New to the Bitches! canon is hunky Aussie lifeguard Scott – brought spectacularly to life by Tom Mann with more impressive Speedo action and a smile to die for. Liam Nooney makes a superb Above the Stag debut as Garth’s more intellectual fiancee Drew – hilariously putting the camp into hippocampus.

An immersive beach-bar set by Andrew Beckett and enchanting lighting design by Jack Weir complete a transportive experience that is the perfect tonic to slate-grey February skies. Director Andrew Beckett has created a fabulous frolicsome fantasy that will leave you booking that winter-sun break in less time than it takes Fat Pam to polish off a Golden Gaytime. A popular Australian ice cream brand, just in case you were wondering.

The creators insist that this is the absolute final word from the Bitches! oeuvre, but we reckon that it’s got legs yet. Here’s hoping for further escapades from these colourful characters that we’ve come to know and love over the years – they’ve shagged and bitched their way around the world and into our hearts – long may it continue!