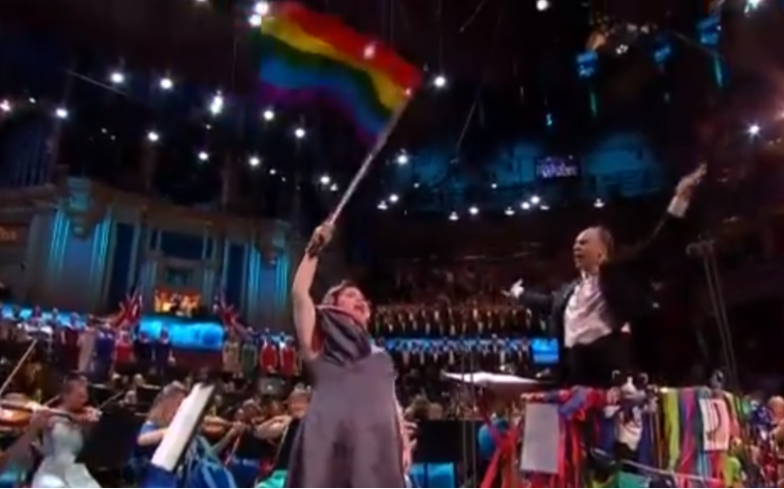 Jamie Barton wore a dress which featured the bisexual flag’s colours and waved a Pride flag.

Opera singer Jamie Barton was the main star of last night’s BBC’s Last Night of the Proms, and she used the moment to promote queer visibility.

Coming onto the stage, Barton was wearing a dress with a section coloured like the bisexual flag, something she did as “a statement of the pride in my community.” And as she neared the end of Rule Britannia, the singer pulled out a large Pride flag and waved it.

Barton also performed the gay anthem, Somewhere Over the Rainbow, saying “it felt a little too on-brand not to do.”

The BBC reports Jamie Barton saying: “It’s not only a very important thing to me personally, but it’s also something I think unifies the audience.

“It’s not just queer pride, it’s a connective celebration of people being exactly who they are and loving who they are. And I’m honoured to get to lead that.”

She also told The Times, “When I sat down with the BBC in October I told them, ‘You know, I can think of a flag that I can get behind. I’d really like to carry the Pride flag.’”

Barton came out as bisexual in 2014, on National Coming Out Day. Since the performance, Barton has posted on Twitter: “I’ve been scrolling through my Twitter notifications for an hour now, and am not even halfway through!

She ended her post with two emojis showing the rainbow flag, and a series of hearts representing the colours in the bisexual flag.

Replying to her post, one gay man thanked her for the show of visibility. “Thank you for *everything* you did last night. You were amazing! Fantastic singing and brilliant representation,” he wrote. “Have been watching LNOTP since I was a child, and for the first time feel like I belong there. Love from me and my husband.”