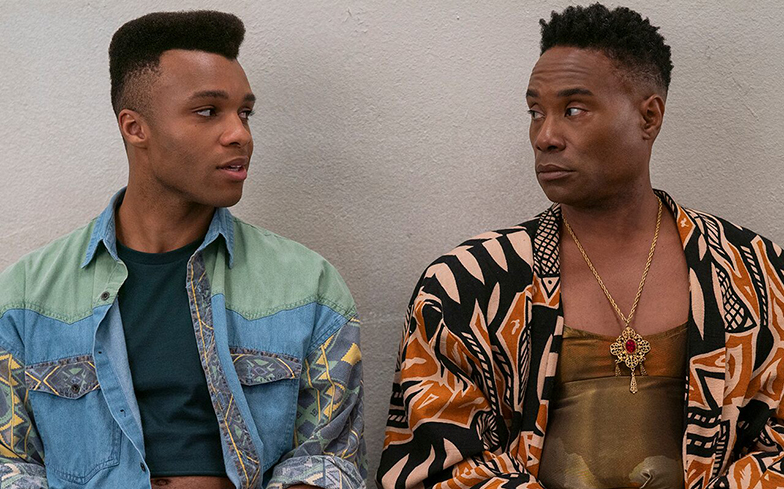 Billy Porter has opened up about his groundbreaking Pose sex scene.

The award-winning actor (and former GAY TIMES cover star) starred in his first ever on-screen love scene for the 6 August episode of Pose, Revelations, and has since revealed it was one of the hardest things he’s had to film.

“Making love, sex is the most vulnerable of places that a human can be in with another person,” he told The Hollywood Reporter on the red carpet as he celebrated his and Pose’s Emmy nominations.

“As an actor, to share what that personally looks like to you, it’s new. It’s very vulnerable. It was hard for me to watch because it was actually very real. That’s something that’s very private. It’s a private moment that I feel like I have now cracked open and begun to share in how I tell stories now.”

The scene in question saw Billy’s fan favourite character Pray Tell help Ricky (Dyllon Burnside) learn how to look after himself after a positive HIV diagnosis – a conversation that ended with them in bed together. “That’s what I love so much about television. Because of multiple episodes, multiple hours, we get to see characters evolve and grow and live in a more real-time fashion,” he continued.

“And I’m excited that people get to see this human being, this archetype, this African American out, gay, powerful man.”

Speaking to Entertainment Tonight, co-star Dyllon explained why the scene was so groundbreaking.

“It’s the first time we have ever seen two black, queer, HIV-positive men in an intergenerational relationship have sex on television. It’s never happened before. It’s a big deal,” he said.

“I’m grateful to be able to explore this relationship. I can’t say much at this point, but I will say that I think Ricky and Pray definitely find something real in one another. So, as you’re watching, you’re able to look beyond what on the surface is messy — but life is messy.

“I hope that people are able to see the beauty in two people finding love and support with one another. I think that we’ll see both of them grow from this relationship. I think we’re going to see them evolve. Ultimately, that’s what relationships are about.”