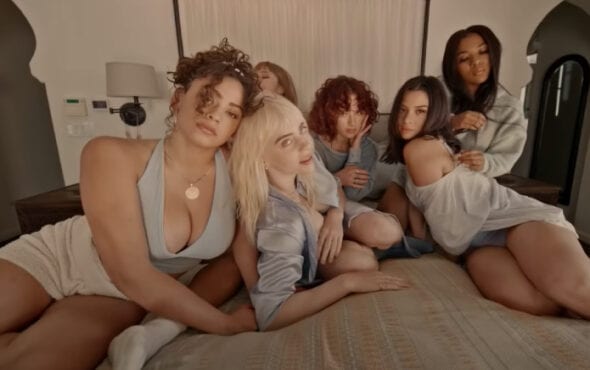 Shortly after releasing the video for her single Lost Cause, fans took to Twitter to express their thoughts on the visual.

Some music listeners accused the Bad Guy singer of “queer-baiting” due to the video’s sapphic undertones and scenes.

One Twitter user wrote: “Is Billie Eilish bi? Or did I just watch for minutes of queer-baiting done by a straight person?”

Fans of the songstress were sent into a frenzy and flooded her social media accounts, asking the Ocean Eyes singer to elaborate on the cryptic caption.

Is Billie eilish bi? Or did I just watch four minutes of queerbaiting done by a straight person

“Queer bating or coming out OR girlie appreciation taken the wrong way? We will never know,” another user commented.

The Bury a Friend artist hasn’t released any further comments or explanation to her recent post.

This isn’t the first time that Billie has been accused of queer-baiting within her music.

Back in 2019, the songstress faced backlash for her single Wish You Were Gay, which featured lyrics like: “I can’t tell you how much I wish I didn’t wanna stay / I just kinda wish you were gay.”

In an interview with Pop Buzz, the 17-year-old artist explained: “First off I want to be so clear that it’s so not supposed to be an insult. I feel like it’s been a little bit misinterpreted. I tried so hard to not make it in any way offensive.

Watch the video for Lost Cause below.