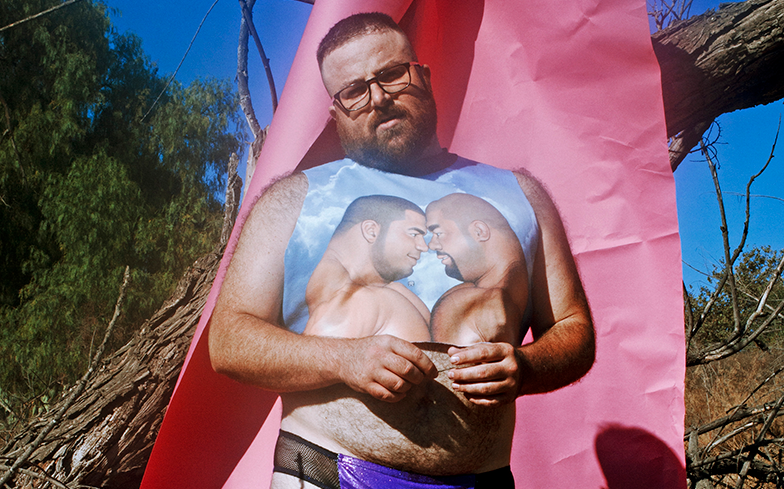 “There is something extremely empowering about celebrating and sexualising my body after so many years of feeling ashamed and that I wasn’t worthy of love or sex,” Big Dipper tells us.

“In my early 20’s something finally clicked and I realised it was in my own power to be sexy and confident and that really boosted my ego and change the way I saw myself in the world.”

Describing the album as his most personal songwriting to date, Big Dipper reveals: “I felt like I was sharing a lot about who I am and my life on this project. I hope people listen to this album and begin to see a fuller picture of who I am.”

Here, we chat to the body-confident performer about his incredible debut, why he doesn’t give a flying fuck about online trolls, and how the Chicago drag scene has influenced him as an artist.

How would you describe who Big Dipper is?
Big Dipper is basically my most elevated personality. Like, inside my brain if you zoomed in on my confidence and creativity and sexuality you’d find Dipper in a silk robe lounging on a chez with a plate of fried chicken. Big Dipper’s definitely a performer, a showman, a full-on entertainer. It’s not an alter ego, just specific bits of my personality exaggerated; outgoing where I might be shy, funny when I’d be serious, charming when I’d be anxious.

Who are your musical influences?
Growing up it was really Lauryn Hill, Missy Elliott, Busta Rhymes, Eminem; these artists really shaped how I understood music and performance. I’ve many song lyrics burned into my brain from age 9-14, it’s wild how those words can just stay in your mind. I was always drawn to rap music and hip-hop, but really enjoyed pop music as a kid too. It was really cool to watch rap crossover to mainstream radio. I’ve always been really interested in music that has mass appeal, like how does it happen that so many people like a specific song? Now I stay up on mainstream music more because I DJ at parties but on my own I listen to a lot of my friends’ music. It’s so cool to know lots of indie artists personally and be able to support and listen to their music.

How does your sexuality influence your music?
I never set out to make music with strong sexual messaging or content… it just kind of happened that way. There is something extremely empowering about celebrating and sexualising my body after so many years of feeling ashamed and that I wasn’t worthy of love or sex. I struggled with loving my body, my size, my hairy chest and back, for a long time and couldn’t fathom anyone finding me sexy. In my early 20’s something finally clicked and I realized it was in my own power to be sexy and confident and that really boosted my ego and changed the way I saw myself in the world. It’s not something I feel all the time, but I know it’s there, so when I write music, I always tap into that sexual confidence and it helps me.

We’re obsessed with your new album. It’s raunchy, fun and authentic. What do you hope people take away from it?
I hope people listen to this album and begin to see a fuller picture of who I am. I’m really proud of all the work on this album. It’s my most honest songwriting and I think it’s really really good. I felt like I was sharing a lot about who I am and my life on this project. I’ve always felt like a late bloomer, so it felt cool to reflect those ideas in my music.

You’ve spoken before about the abuse you’ve received online about your weight. What inspired you to be so outspoken about your body image?
Well first let’s say this: There is real abuse and bullying happening out in the world and I’m lucky enough to not receive that kind of attention. I get the ignorant YouTube comments and Facebook messages about being fat and ugly and how my videos are ‘why everyone hates gay people’ – that stuff is fairly easy to ignore. Those kind of dumb comments don’t do anything but make me feel like I’m actually doing my job. I actually don’t think I’m specifically outspoken about my body image, I just think people aren’t used to seeing my body type sexualized. That was the main inspiration behind the video for Lookin’. There are so many videos set at car washes that feature bikini clad women and super sexual imagery. I wanted to flip that idea and feature guys that I find hot. For me, my intention is always about making good music, strong visuals, and really expressing myself. The body positive messaging rings true because it’s not forced… it’s just true to my life.

You’re a Chicago native. How does the infamous drag scene there influence you as an individual?
I was born and raised in Evanston – just outside of Chicago – and then lived in the city for about six years before moving to Brooklyn and then to Los Angeles. Chicago is where I became an artist, a performer, and where I first made music and learned about creating music videos. I love that city and love returning to perform and see friends. The work ethic and artistry in the queer community in Chicago is really incredible. The drag scene has always been exceptional, but it has really grown and expanded (from what I can tell) in the last five or so years and I haven’t been living there, so I can’t really speak to that. It’s an incredible thing to observe and celebrate, but I’m a total outsider so I don’t have the scoop on anything.

What’s the craziest thing that’s happened to you on the queer scene?
I found a chosen family, I created life long friendships and collaborative relationships. I’ve traveled around the world and felt completely at home because of our unspoken queer connection. I’ve been lifted up and celebrated and torn down and bullied in the queer scene. I feel lucky to have a smaller world within our big crazy world that feels unique and special.

You’re also a musical theatre kid at heart, just like us. Favourite musical ever?
It’s so interesting…. I definitely have a musical theatre vibe to me, love campy things, and love the production behind big musicals; the singing and choreo, big sets and storytelling. I went to theatre school in college, but for the past decade I have kind of fallen away from that world. I have a dream to direct a big musical one day so maybe my performer brain will take a back seat and I’ll direct some crazy musical soon.

What can fans expect when they attend a Big Dipper show?
A Big Dipper show is fun, upbeat, loud, and I deliver live vocals. Plus, a bit of a strip show too. I can confidently say it’s unlike anything you’ve ever seen. I love to entertain and I know I’m good at it.

And finally, what’s the biggest misconception of you?
Well recently I’ve started to hear stories coming back to me. I guess the word on some streets is that I’m an asshole and a diva – I think that’s a misconception. Sometimes I’m not really great at small talk, so maybe that’s it? I actually enjoy working and being productive, so when I get to show I’m really all about my business and like to jump right in and say what I need and how things should run. So sometimes I think that comes off as aggressive… but that’s about it. I’m pretty shy and nice actually, and I’m bummed some people think I’m an asshole. What have you heard?