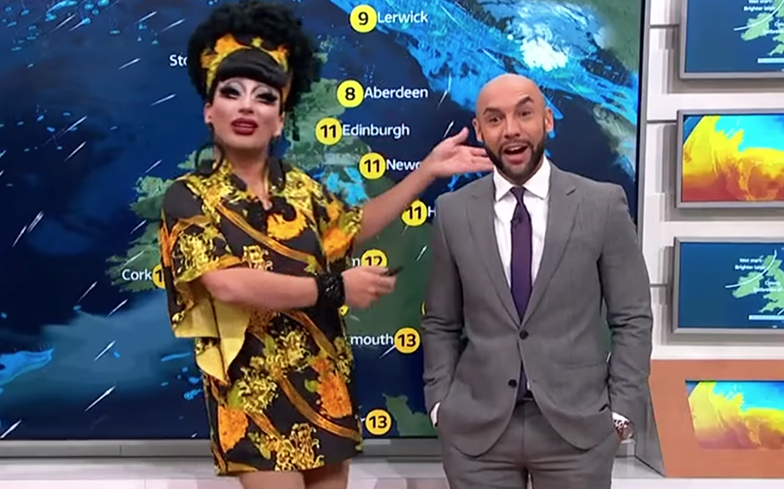 Breakfast TV will never be the same again.

Good Morning Britain had an injection of clownery this week as stand-up comedian and RuPaul’s Drag Race winner Bianca Del Rio made an appearance – and as expected, she took no prisoners.

“As an actor, this is the packaging to get away with murder. If I didn’t wear this they’d say I’m just a bitter… well, they’d say I’m him,” she said, pointing to presenter Richard Arnold, “but with this on it’s called show business!”

She also shared her advice for dealing with haters, explaining: “That doesn’t affect me, because I know deep in my heart that they’re gonna die one day.”

But the best moment came when Bianca decided to hijack the weather forecast, taking over from Alex and mocking him about how simple his job is.

“Why can’t anybody else seem to get this done? This is easy, you’re not needed here anymore,” she joked, before adding: “This is all you have to do, and they pay you for this?”

Now, who’s going to start the petition to replace Piers Morgan with Bianca?

Bianca made the appearance to promote her headline show at London’s Wembley Arena next year, in what will be the biggest ever solo drag show the UK has ever seen.

“I’ve been told I’ll be the first drag queen to headline at Wembley Arena! I’m excited… but also concerned that they aren’t prepared for glitter and wig hair clogs in the dressing room sinks,” Bianca said.

“I’m incredibly grateful to perform at this beloved British venue before the retirement home comes knocking for me!”