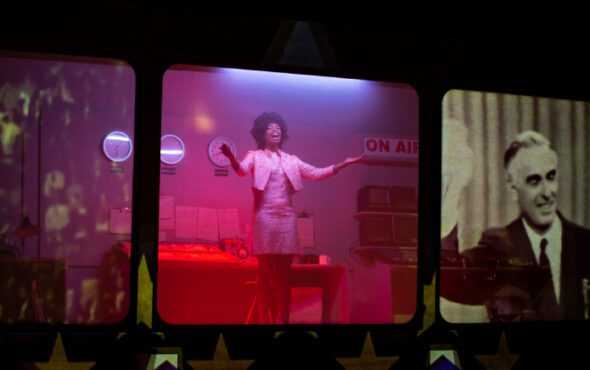 James Graham’s new play, based on the TV debates ahead of the 1968 presidential election, has opened at the Young Vic, directed by Jeremy Herrin.

We’ll get this out of the way first: Best of Enemies has an awful lot of exposition, to the extent that it almost gets completely bogged down in context during the first half-hour. Much of it is helpful, especially for those unfamiliar with the events leading up to the 1968 presidential election, but it’s such a slow burn that we began wondering whether we’d get to the good bits. Yes, we have a cameo from Aretha Franklin and an amusing snapshot of Andy Warhol being annoying at a party, but we thought the first segment of the play could have done with some editing. Towards the end of act one, however, our patience was suitably rewarded with a scintillating insight into the early days of televised political punditry which grabbed us and didn’t let go until the end.

In summary, this play focuses on the struggling ABC network whose news coverage is trailing in a distant third place in a ratings battle. Determined to turn this around, they land upon the idea of ‘unconventional convention coverage’, which would see their news anchor interviewing two prominent political minds of the day – left-leaning novelist Gore Vidal, and conservative commentator William F Buckley Jr – live on air. The play uses their words verbatim – featuring a series of vicious personal takedowns, including one aimed at Vidal’s sexuality – but adds behind-the-scenes moments of Graham’s own creation. 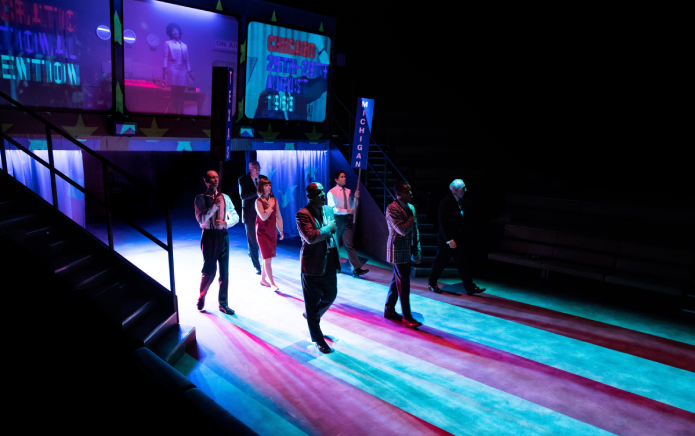 It’s fascinating to watch unfold – this is a play that really celebrates the medium of television, and the increasingly-lost concept of event television: shows that everyone would watch and would become the talking points of the population at large. David Harewood and Charles Edwards are both superb in the central roles, believable in the mutual disdain that they both feed off. It’s a genuinely exciting play to watch develop – as the debates continue, the atmosphere in the room becomes more and more electric. It’s almost an immersive experience, with screens and ‘on air’ signs dotted around the theatre space – we genuinely felt involved and invested in the action.

We had a really great couple of hours with this enthralling political drama – Best of Enemies may take a little while to warm up, but when it gets going it keeps getting better and better. With a little editing to the first act this could easily be a contender for a perfect score, but it’s absolutely worth seeing as it currently stands. Politics geeks and those who love the art of television will adore this.