13 of the best Christmas songs from LGBTQ artists 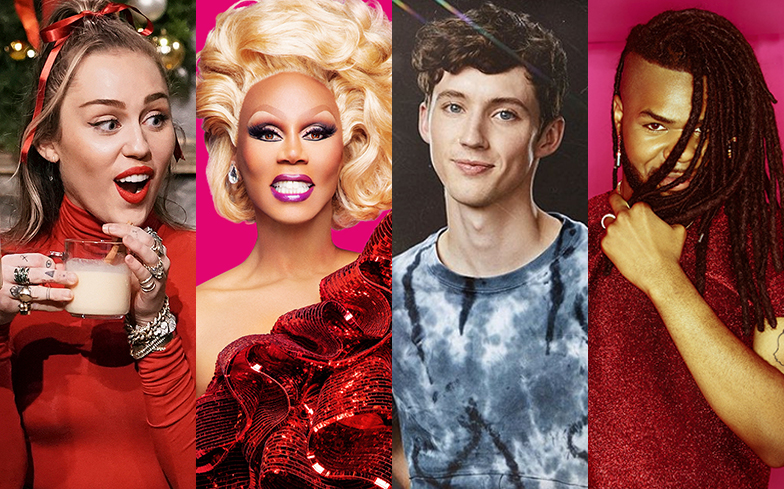 Time to make the yuletide (and your playlist) gay.

While the number of Christmas movies featuring LGBTQ characters and storylines may sadly still be abysmal, there’s no reason your speakers or headphones can’t be blasting out queer festive cheer this December.

There’s classic tracks from Elton John and Wham!, through to modern-day Christmas bops from MNEK and Sia, and even some more… interesting choices from Lady Gaga, bounce pioneer Big Freedia and hyperpop star Slayyyter.

Below, we’ve rounded up some of our favourite queer festive tracks – make sure to add them to your playlists ahead of 25 December.

Sam Smith – Have Yourself A Merry Little Christmas

With a voice as sentimental as theirs, we’re shocked that Sam Smith hasn’t released an original Christmas song – but we’ll always have their beautiful cover of Have Yourself A Merry Little Christmas. Sam once said it’s the only festive song they like, citing Judy Garland and the melancholy feel of the track as reasons why. It’s our favourite version of the song by far.

On Stopped Believing in Santa, the British singer-songwriter finds himself unable to celebrate Christmas because he’s split with his partner. The track showcases MNEK’s smooth vocals over a wistful beat. It’s heartbreaking, but gorgeous.

The ultimate nostalgia blast during the festive season is hearing John Lennon and Yoko Ono’s Happy Xmas (War Is Over), and pansexual singer Miley Cyrus did the iconic track justice with her recent cover, accompanied by Mark Ronson and Sean Ono Lennon.

Christmas isn’t really Christmas until you’ve heard Wham!’s legendary Last Christmas, easily one of the greatest festive tracks of all time. The track has been covered by numerous members of pop’s royal family including Ariana Grande, Carly Rae Jepsen and Hilary Duff, but there’s something magical about the original. It’s also the perfect opportunity to remember George Michael, who sadly passed away on Christmas Day in 2016.

Okay, so a RuPaul holiday track might not be suitable for the dinner table, but Hey Sis, It’s Christmas is the perfect party-starter for a kiki over mulled wine (or a vodka soda, whatever takes your fancy) with friends this December. We’ve lost track of how many times we’ve heard this song in the GAY TIMES office.

Sia – Santa’s Coming For Us

It’s become a rite of passage for pop stars to attempt to slide into our Christmas playlists with at least one festive track in their career, but rarely are they as successful as Sia, who released a whole album full of brilliant Christmas bops. Don’t let the somewhat unsettling title fool you – Santa’s Coming For Us is one of the biggest mood-lifters you’ll hear in December.

Up next, we have another festive classic from music legend Elton John. Your grandma might not appreciate your favourite modern-day holiday songs from the likes of Britney Spears and Destiny’s Child, but Step Into Christmas is a guaranteed crowd-pleaser, so add it to the playlist.

Tony Award-winning performers Idina Menzel (Frozen) and Billy Porter (Pose) showcase their powerhouse vocals for a show-stopping new rendition of Irving Berlin’s holiday classic, which is taken from Menzel’s new Christmas-themed studio album, Christmas: A Season of Love. We have a feeling this will receive heavy rotation on music video channels for years to come.

Let’s face it, the Pet Shop Boys were never going to do Christmas songs in a traditional way, and we’d never want them to. It Doesn’t Often Snow At Christmas is a massive pop banger, and while it might not be a classic, it makes for a nice change from the more somber sounds that often dominate festive playlists.

Lady Gaga’s filthiest song also happens to be one for the holidays. Yes, it’s her (relatively unknown) festive gem Christmas Tree. It originates from her The Fame days, so it’s full of innuendo – “my Christmas tree is delicious” – laced with autotune and backed by synth-heavy pop production. It even has vocals from Space Cowboy and one of Gaga’s “cherry, cherry, boom, boom” producer name drops. Now that’s a throwback.

If anyone was going to deliver a twerk-ready Christmas version of Mr Sandman with the lyrics, “Santa, I’ve been so good, I used protection whenever I could”, it was going to be bounce music innovator Big Freedia. Save this one for the after party.

Slayyyter and Ayesha Erotica – All I Want For Xxxmas

All you Christmas purists out there might want to look away now. This recent entry onto our festive playlists comes from sex-positive bisexual hyperpop star Slayyyter, who’s become a favourite of the gays over the past year. The chorus features the lyrics, “All I want for Christmas is to get fucked, take a big hit, get my tits sucked,” so play this one at your own risk.