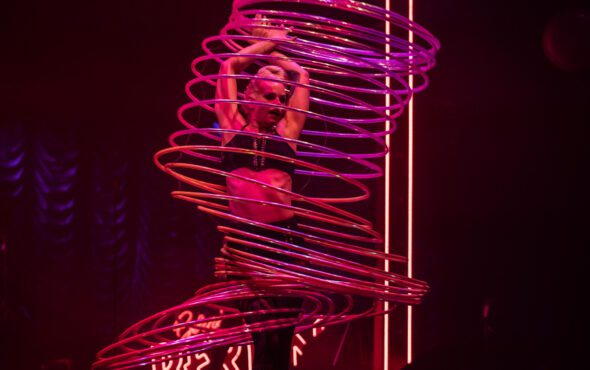 We caught the cabaret star and her troupe at the Underbelly Festival in Cavendish Square.

We’re big fans of Bernie Dieter, having caught her show Little Death Club at the Underbelly Festival in 2019 and also La Clique which she hosted in Leicester Square later that year. As such the format of Berlin Underground didn’t come as a surprise to us – Bernie hosted the evening in her trademark style. The poster advertised her as the undisputed queen of punk cabaret, and who are we to disagree? As well as compering the night, Bernie sang a number of songs, ably supported by a four-piece live band; mostly to accompany the acts but occasionally with her own solos. A word of warning to those of a sensitive disposition – they’re mostly pretty filthy (and frequently very funny).

Over the course of an hour we’re introduced to Lisa Lottie, who knows her way around a hula hoop or ten, and does an impressive turn as a human slinky; the duo Little Finch, comprising husbands Jonathan Finch-Brown and Ben Finch-Brown, impressive aerialists who don’t wear any more clothes than necessary (no complaints from us); and Jao, who pushes the boundaries of what pole dancing can be, with an act which strikes the right balance between beauty and a sense of danger. None of the acts particularly surprised us with their originality, but it’s still unusual to see performers of this quality in a space so intimate. A show like this could run the risk of being a little one-note, but there are some moments which surprise. In particular, we thoroughly enjoyed Bernie’s deconstruction of MGMT’s Time To Pretend – reimagined as a poignant ballad, it silenced the otherwise rather boisterous audience, with the lyrics taking on a new resonance when performed in this context.

There’s a lot to enjoy at the Berlin Underground – it really captures the essence of a glorious night of debauchery at a German cabaret club. The band sounds great, and Bernie is a bold, brash and brilliant host, with some entertaining moments of Covid-friendly audience interaction. It’s a slick show which is visually striking and there’s a really great atmosphere inside the Spiegeltent – this is the sort of performance that makes you really appreciate being part of a communal experience again.

More information can be found here