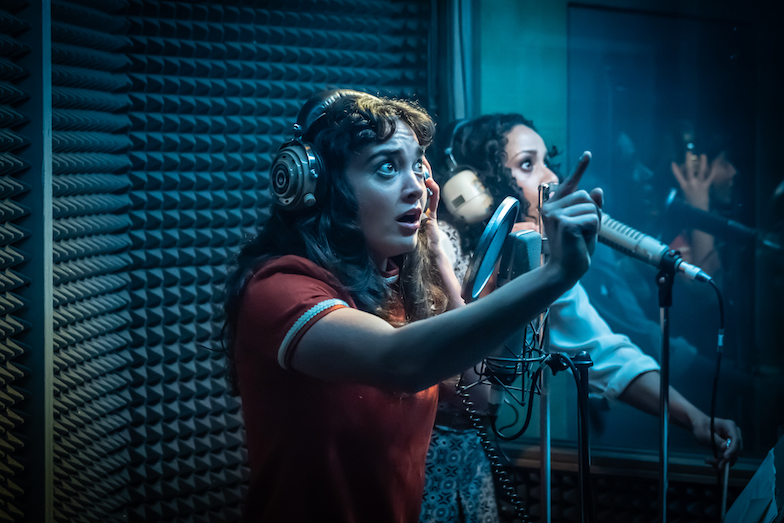 Based on the original motion picture screenplay by Peter Strickland, Berberian Sound Studio tells the story of Gilderoy (Tom Brooke), a Dorking-based sound designer best known for his work on nature documentaries. The year is 1976 and giallo horror is in its prime; an elusive director known as Santini invites Gilderoy over to Italy to work on a film called The Equestrian Vortex which, he soon discovers, is absolutely not a nature documentary at all.

The weird and wonderful world of the production studio has been faithfully recreated on the stage. This is a full-on retro affair, with celery sticks crunched, carrots chopped and watermelons smashed to recreate the sound effects of various body parts being dismembered. It’s interesting – and regularly amusing – to see and hear these noises being created and then manipulated via the technology in the sound studio. The intelligent use of audio lends the show a unique and immersive atmosphere, one which is regularly quite creepy – especially combined with the low lighting.

In terms of the narrative, however, it’s all a bit vague. Yes, the key themes are easy to spot; the descent of Gilderoy’s mental state as he becomes more aware of the film’s sinister undertones is the most evident; there is an exploration of the power of men and the manipulation of women. Yet the story never seems to reach any sort of logical conclusion and none of the individual strands feel like they resolve satisfactorily – while it had potential to deliver some powerful messages on topical issues, it was difficult to tell exactly what the takeaways should be.

It’s disappointing as Berberian Sound Studio seems to get a lot right, especially from a technical perspective. It looks and sounds terrific, resulting in a wonderfully atmospheric and creepy stage adaptation of the cult horror film. There’s some strong acting too and a handful of enjoyable – if somewhat dark – moments of comedy. We were just a bit baffled by the ending – it didn’t quite say enough and left too much ambiguity for our liking.