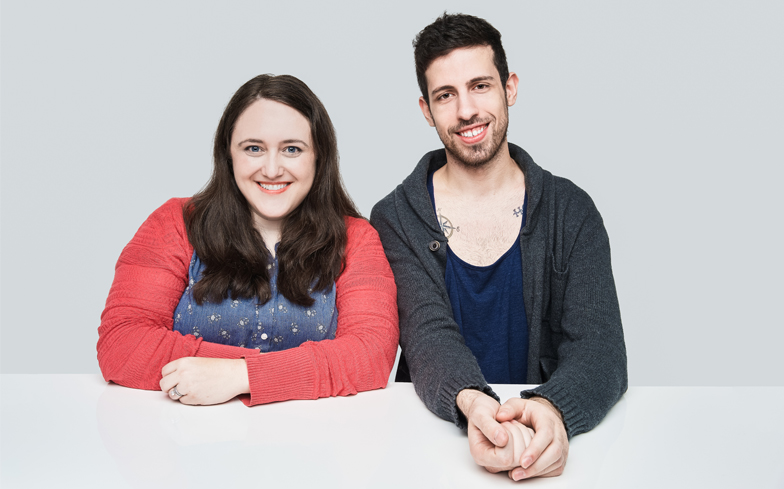 It’s not often that two huge authors team up to write a new novel together. It’s even more rare when that novel is a modern-day love story between two openly gay teens in New York City.

That’s precisely the premise of Becky Albertalli and Adam Silvera’s fantastic new book What If It’s Us. You’ll recognise the former author’s name from Simon Vs. The Homo Sapien Agenda (which was later adapted into the movie Love, Simon), and the latter for his brilliant novel They Both Die at the End, among others.

After forming a friendship over social media back in 2014, the best-selling writers decided to work together on a novel that would combine the best aspects of their respective work. Becky wrote all the chapters from Arthur’s perspective, while Adam drives Ben’s story throughout the novel. It has all the twists, turns and heartache of a great romance.

Ben and Arthur are almost alter-egos of you each – for a start one’s from Georgia, the other New York – so what are the other similarities between you and your respective characters that readers might not know about?
Becky: Arthur is the one from Georgia, and he’s Jewish like I am, he’s short like I am, and he has ADHD which is based on my own experiences as well. One of the things that is really on Arthur’s mind all the time is that he’s not only a big fan of Broadway, which is very much based on my love for Broadway for my whole life, but part of it is that Broadway and his love of musicals and big theatrical love stories is affecting his world view. He has this romanticised, larger-than-life view of love.
Adam: Like Ben, I’m a tall white-passing Puerto Rican who grew up very poor and found myself in summer school three years in a row, so writing about summer school was something that I always wanted to do. It really worked well with this novel in direct contrast with Arthur who is more of a brilliant kid and has higher college aspirations than Ben. I was never really shooting for the stars when I was thinking about college. I also have believed in different signs from the universe, and have since been burned by them. Sometimes I will see a name I really like and then gravitate towards that person and then they will turn out to be really toxic or something. So I have followed signs and then been betrayed by the universe. So a lot of Ben’s attitude towards the universe definitely reflects one I continue to carry into adult life.
Becky: I think in general Ben is more cynical than Arthur. Arthur is a little bit more inexperienced all round – certainly romantically, but also there are just some things he doesn’t understand about the world yet. Some of that is his own privilege. He will periodically put his foot in his mouth. Arthur is the kind of kid – and I hate to admit that I was this kid too, and I’ve since learned otherwise – but he has this expectation that college is the thing you do after high school. I didn’t understand that college is just not for every kid. Arthur is a little bit like that. You can kind of tell it from the way he talks to Ben.

I was going to bring up Arthur’s white privilege. There’s a moment when Ben gets annoyed with Arthur after he makes an ill-placed remark about Ben’s Puerto Rican heritage. Why was it necessary to explore that within this interracial relationship?
Adam: I think I have come to grips following our recent 2016 Presidential Election where I hadn’t been aware of the privilege I had carried by being white-passing. I’ve always written about Puerto Rican characters, but I didn’t realise how invisibly Puerto Rican I’ve been to the outside world. I just thought everyone knew. I have been internalising why that has been so frustrating for me over the years – constantly having to tell people that I am Puerto Rican and being told that I don’t look it – when I’ve grown up with a very Puerto Rican family. I just wanted to also put it out there how no-one has any ethnicity that is bound to look one way. That’s a gigantic misconception that our country has. In terms of exploring that with Arthur, these are two kids who have had very different upbringings. Arthur lives in a house and Ben lives in a tiny three-bedroom apartment and his parents are struggling to make ends meet. So this cultural clash – especially in this day and age – it just felt important to use this book as a platform to announce some of this. How important was it for you both to have two gay characters that are still in school, open about their sexuality, and there’s absolutely no drama about it all from their family and friends?
Adam: It was very important. Obviously there are all shades of stories that we want to be experiencing. That’s not to say that a story about teenager being out with no consequences from their family is of more importance than a story of a closeted teenager. But there is a lack of teenagers who are just happily queer, and it’s important to contribute to that narrative as well. I tell people all the time that it felt like writing about a teenage experience that I personally never lived in. Ben is me. I grew up very poor, and Ben at least had his own bedroom – I didn’t. The major modification was Ben being out and happy and his parents being accepting. It felt sort of dreamy to be able to write that. It’s incredible that it provides hope to teenagers who are closeted right now, but it also makes other teens who are out now feel seen. Ultimately it shows to all queer teenagers that the way we love isn’t always connected to hate and tragedy.

Did you read much queer literature growing up?
Adam: It came later in life. It’s not that it wasn’t there, it’s just I was not interested in reading about gay people. Mainly because I hadn’t been exposed to any stories before. So there are many books that are published today where I’m like, ‘Whoa I can only imagine if I had this at 16.’ But I didn’t read about a gay character until I was 19.

Social media is used in this novel as a tool for finding love. What are your thoughts when it comes to social media’s role in modern-day relationships?
Adam: Becky and I literally know each other because of social media. I have six lines tattooed on my arm that represent six of my best friends, and Becky is one. These are all people I met through social media. It’s incredible the relationships that can be fostered online because we’re all scattered across the country. To be able develop really intimate relationships when you see someone maybe only four times a year, it’s just an incredible power. We’re now in an age when a lot of dating is done online, and that was something I had resisted for the longest too, because I was like, ‘Oh no, I want an epic meet cute.’ Something you write a book about. But now I’ve met really incredible people online who are still in my life today, so I love anytime we get to embrace the power of social media which of course also has its many imperfections.
Becky: As adult writers who do YA we get asked if we deliberately include mentions of Instagram or inject the use of social media into the story in order to make it appeal to the teens. But the process is so much more organic than some people would expect. There was never a moment where we were like, ‘OK, let’s make sure we include a technological component.’ It’s nothing like that. It’s as natural as any plot element. If you were a person trying to find a person, what would that look like? So social media was always going to be a big part of this story because of who Arthur and Ben are and the world they are embedded in. What If It’s Us was picked up to be adapted into a film before it even hit shop shelves, which is pretty amazing.
Adam: Yeah, so we’re working with Brian Yorkey who is the co-creator of Netflix’s 13 Reasons Why, as well as being the playwright of If/Then and Next To Normal. So he has this incredible combination of working with YA but also the Broadway background, and that is literally a perfect storm for What If It’s Us.
Becky: We had the opportunity to speak with this team on the phone and we were head of heels. In terms of What If It’s Us, it felt clearly like a message from the universe. We were speaking to this team who seem to understand this book exactly the same way we understand it.

Being a Harry Potter fan, I love all the references to the franchise in this book – have either of you met JK Rowling yet?
Adam and Becky: No!
Adam: Do you have an in? Can you hook us up?

Oh I wish.
Adam: So I came close one time. It was in 2012 when her first adult novel Casual Vacancy was coming out, and she had this massive event in New York. I was out of town at the time but I was set to come back in time for this event. I was up early at like 5:30am, which is not a time that I wake up. The tickets were only going to be available for so long and I was on call and I was seventh in line and then I forgot that in the apartment I was in that calls tend to drop in that area, and it dropped literally right as I was giving my credit card information. When I called back I couldn’t even get through. It was just too busy. I was devastated. It was brutal.

As writers who both have queer characters as the centre of your stories, have you ever faced much resistance towards that when pitching your novels?
Adam: Yeah, of course. I’ve had an editor – in the case of my first novel – she was strongly hinting or even outright said that she’d be more interested in the book if I had focussed on the relationship between the boy and the girl, versus the two boys. It was basically, ‘Make the book straight.’ That’s really heartbreaking. Publishing has not always been super inclusive and it’s sort of course-correcting a little bit now. Pretty slowly, but we are making some progress. Publishers for a long time didn’t know what to do with stories that weren’t about white, heterosexual, able-bodied, cisgender people. Now they’re sort of recognising that readers from many marginalised communities want more, and are willing to buy these books if you give them proper marketing. We have definitely seen resistance, but also we’re incredibly grateful for our publishers across the world who have been prioritising our work for these underserved communities.

What If It’s Us is available to buy now.