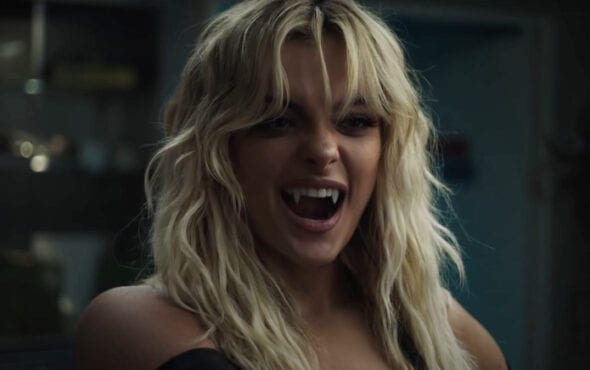 The gays are living for Bebe Rexha’s new single.

Sacrifice, a pulsating, club-ready anthem, was met with critical acclaim upon its release on Friday (5 March).

“Wanna be the air every time you breathe, running through your veins and the spaces in between,” she sings on the infectious track. “I wanna feel your heart every time it bleeds, living in your brain, there’s only room for me.”

In the video, Bebe steps into the role of a bloodthirsty, leather-clad vampire who leads her fanged posse on a rampage through a hospital, before letting go of their inhibitions in a Blade-inspired club scene as blood pours from the roof.

Leading up to the release, the singer-songwriter said she’s “gonna give the gays everything they want” on the song, and it’s safe to say that she fulfilled that promise.

One fan wrote: “Girl, when you said you would give the gays everything they wanted, I didn’t expect you to suffocate and sacrifice us with so much serve.”

Another tweeted: “Bebe Rexha thinks putting out a house-pop song is giving the gays everything they want? Well, she’s right.”

Girl. when you said you would give the gays everything they wanted, I didn't expect you to suffocate and sacrifice us with so much serve

Bebe Rexha thinks putting out a house-pop song is giving the gays everything they want? Well, she’s right.

BEBE REXHA GAVE US THE GAY BOP SHE PROMISED pic.twitter.com/XR62I0WzkL

“are you gay?” — boring, overused, very awkward
“is sacrifice your favourite bebe rexha song?” — new, revolutionary, popular with the teens

Ok I'm loving this new bebe rexha song. She did that for the gays

When pop girls stop catering to the straights and put out bops for us gays > (Sacrifice by Bebe Rexha has been on repeat nonstop!)

BEBE REXHA SAID" I WILL GIVE EVERYTHING GAYS WANT" AND SHE FULFILLED WITH HER PROMISE#SACRIFICE pic.twitter.com/rnoHrvPn4d

I can't put into words what I'm feeling, it's the best song ever. I'm obsessed with mv. Yes @BebeRexha, it was all that gays wanted #SACRIFICE #SACRIFICEMUSICVIDEO pic.twitter.com/iQEV5Unkje

You said you would give everything the gays want and this country is all made by gays. So 209M streams to our bebê, Bebe 💚💛💙

Sacrifice is Bebe’s first single of 2021 and the follow-up to her Doja Cat collaboration, Baby I’m Jealous, both of which will appear on album two.

In a statement, she said her sophomore collection is “by far the most challenging yet fulfilling project” she’s ever worked on, adding: “I wrote, recorded, re-wrote, re-recorded and then repeated that process in order to deliver an album that truly reflects who I am as a singer, songwriter and most importantly as an artist.”

With the album, Bebe wants her listeners to embark on a “journey of pop paradise fused with elements of rock and hip-hop” and that the lyrics will continue to “recognise ongoing themes of vulnerability, the cycle of self-destruction and self realisation,” as well as “female empowerment”.

Sacrifice is now available on iTunes and streaming services – watch the fangtastic new music video here or below.