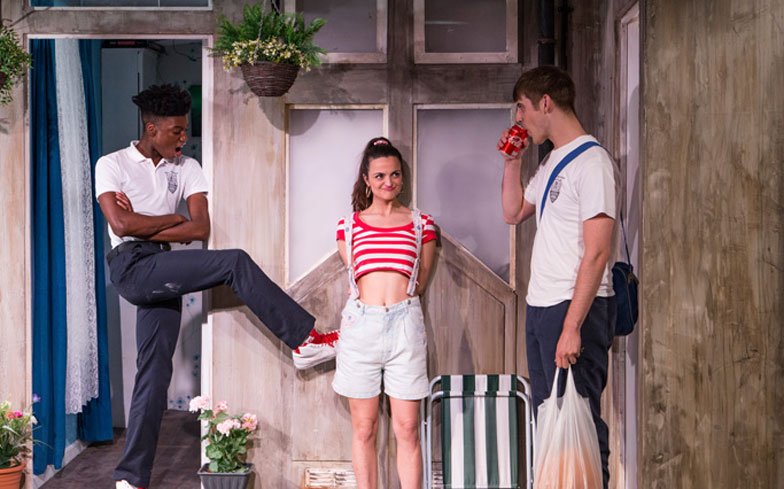 At a time when LGBTQ venues across the country are dropping like flies, Above the Stag – the UK’s only dedicated LGBTQ theatre – has bucked the trend and become a success story of extraordinary proportions.

This production is the first to be put on at Above The Stag’s brand new expanded premises on the Albert Embankment in Vauxhall. Featuring two stages and a rehearsal studio, as well as fabulously fitted bar space and facilities, this new home for the ‘National Theatre of the LGBT community’ is a glorious testament to the success of Artistic Director Peter Bull and his dedicated team of creatives. They’ve come a long way from their humble beginnings in a small room above a pub in Victoria – and while the shiny new HQ is bigger and better in every respect, it still absolutely retains the familiar and friendly atmosphere that London theatregoers have come to know and love.

Beautiful Thing is the perfect play to launch this state-of-the-art ship, written twenty five years ago by Jonathan Harvey – grand master of the queer arts. In creating this gentle story of two boys on a council estate falling in love with each other, Harvey was consciously avoiding the ubiquitous themes of HIV and AIDS that dominated gay theatre at the time: “Theatre was full then of plays about gay men dying. I wanted to tell a story where nobody died in the end.”

Teenagers Jamie and Ste are neighbours in adjacent flats in a high-rise London tower block. Jamie lives with his mum Sandra and skives off from sports lessons at school. Ste is a keen football player and resides with his violent and abusive father. Their unlikely friendship blossoms into something more when Ste takes refuge from his own family and stays over at Jamie’s place – the boys are forced to share a bed, which leads to the famous peppermint foot lotion scene.

Joshua Asare as Jamie and Ryan Anderson as Ste are pitch perfect in their portrayals of lovestruck teenagers in the nineteen nineties, clumsily fumbling their way to answers about their own sexualities that were not so readily available in the pre-internet age. While this is very much a ‘gay play’, there is no dwelling-on or hammering home of ‘issues’. Even Ste’s homophobic father is kept firmly behind a closed door. What we are presented with is an organic and very natural exploration of identity that focusses far more on character and relationships than any sort of soapbox agenda. Intimate moments featuring the boys in bed are handled with humour and honesty – there’s a family-friendly innocence to the whole narrative that’s a refreshing contrast to the fisting and feltching that tend to populate so many other queer pieces.

Kyla Frye is rock-solid as Sandra, Jamie’s long-suffering mum, and Kieran Mortell delivers deliciously awkward hilarity in the part of Tony, Sandra’s stoner toyboy. Stealing the show, however, is Phoebe Vigor as Leah – the homeschooled tearaway terror who is consumed by her twin loves of Mamma Cass and intoxication. Vigor gives a complete masterclass in comic performance, managing to reduce the audience to hysterics with mere movements of her head. She’s the complete package – creating a character that’s absolutely grounded and relatable, and simultaneously utterly alien and unknowable. One to watch.

Set designer David Shields appears to relish in being freed from the constraints of the previous smaller venue, and has here created a detailed world that sells the story a hundred percent. The mechanics of the stage-build that transport us from exterior scenes to interior ones are magnificent in ambition and execution. Lighting by Jack Weir is, as we have come to expect, a visual treat – sympathetic and complimentary to the taut direction from Steven Dexter. There’s a lovely climactic touch at the end, as the stage blossoms with rainbow hues of apricot, lavender, and mint. Gently spectacular.

There’s a celebratory air to this production that is feels earned and appropriate. Above the Stag have delivered yet another triumph. The commitment and passion on display in every are of production is truly breathtaking. Never mind world domination – at their current success trajectory it’ll be next-stop Uranus!