Barnum’s a night of thrilling acrobatics and captivating performances – review 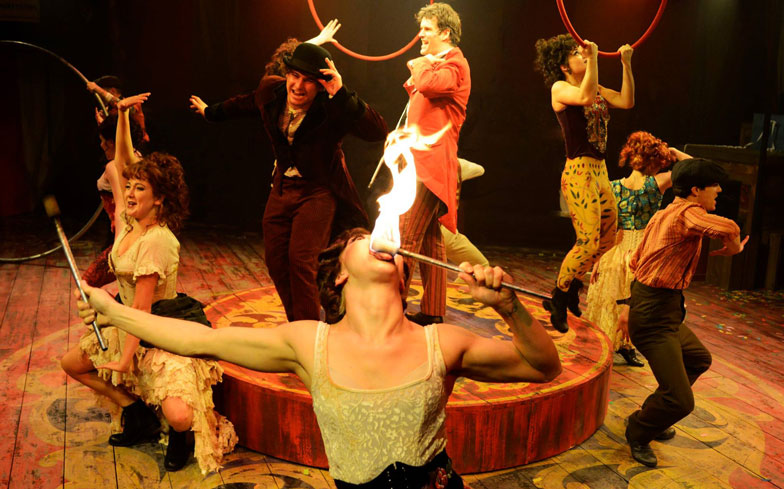 What if we told you that there’s a Big Top down in London Bridge, ready to entertain you?

In playing host to the revival of the 1980 musical, the Menier Chocolate Factory has been transformed into a candy-stripe circus tent. You into fun? Of course you are!

Barnum tells the story of 19th century showman P.T. Barnum, and his struggles in becoming one of the biggest names on the circus scene. Death, infidelity and the demolition of a dream are the milestones of his story, though this production does little to translate the gravitas of these moments on stage.

In evoking the wise-cracking Barnum, Marcus Brigstocke’s moxy and wit is exactly what the part calls for. Though he was clearly uncomfortable with his on stage stunts, and his libretto might have better been spoken than sung, he was a master in the magic of misdirection.

Supporting Brigstocke’s Barnum was an ensemble unlike any that has been seen before on a London stage. They played with fire, they contorted, they juggled, they flipped, they threw each other from one end of the stage to the other, all while singing in pitch perfect harmony. They sailed through like a crew far more competent than their captain.

The show is laden with missed opportunities, with director Gordon Greenberg failing to speak to the current relevance of the lie-peddling, American circus showman who has a brief foray into politics. Trade out infidelity with a Swedish Nightingale for a Slovenian model, and abraca-lania, Trump’s your uncle.

It might be lacking in the finesse and polish one has come to expect in a musical, but Barnum is still a night of thrilling acrobatics and captivating performances (if only from the ensemble).