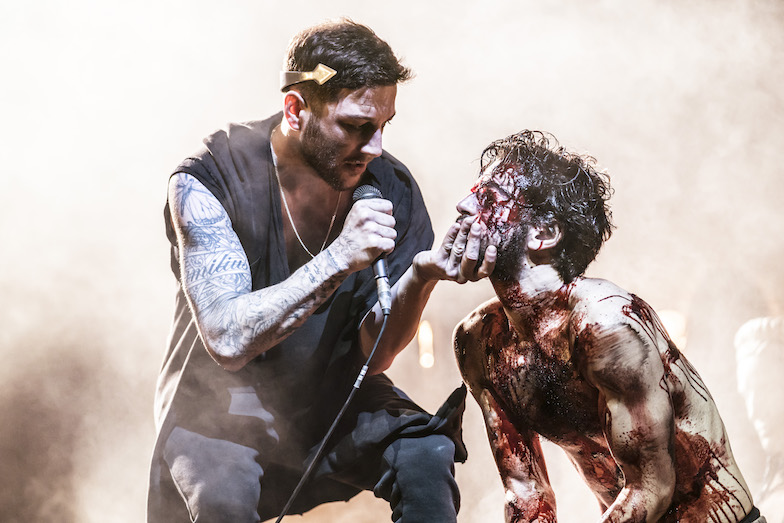 We all know the story and have probably seen a live production of this classic musical, but this new production is set to thrill all over again.

Andrew Lloyd Webber and Tim Rice’s masterpiece opens at London’s Barbican Centre having previously played the Regent’s Park Open Air Theatre in 2016. With some returning cast members but many new faces, this Superstar production sets out from the start its desire to move into a new era. With immersive dance throughout, blood being replaced with glitter and vocals that’ll seem almost an impossible reach, superstar seems a fitting title on many levels.

Timothy Sheader’s production isn’t swapping the gender of any character nor trying to twist this age-old tale into an unexpected direction. What it does is modernise and push its story through as the main player – with Drew McOnie’s dance joining almost as a character or player of its own. Tom Scutt’s design, featuring cut outs of metal girders and one giant fallen cross to one side of the stage that regularly acts as place of storytelling, adding that extra layer of brilliance.

Unsurprisingly it’s the cast of what feels like hundreds that lift this production to a defining best. Ricardo Afonso’s remarkable take on Judas is the absolute standout. A vocal master, you sit patiently waiting for his return to the stage as each scene passes, hoping that a solo number for him is looming. Robert Tripolino’s take on Jesus is cool and understated, later enjoyably defiant as he avoids the powers around him. Similar to Ricardo, its a vocal lesson of some brilliance that leaves the audience showing their love and admiration throughout. Sallay Garnett (Mary) and Matt Cardle (Pilate) also of equal success; both moving and charming.

Jesus Chris Superstar might not be a show that’s fresh from the creators table, but this returning production has found a new home at the Barbican Centre with a cast that make it feel like it’s debut day all over again. It’s fair to say that you haven’t really ever experienced Superstar quite a brilliantly as this!