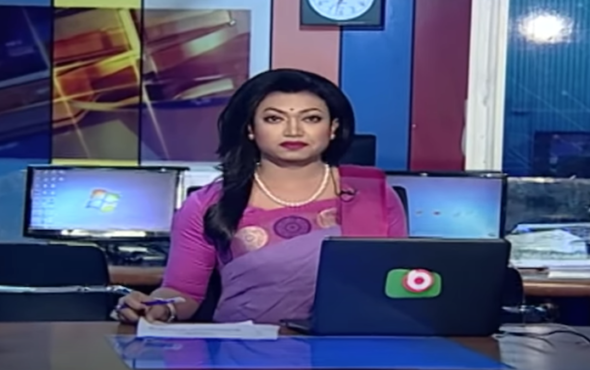 Once the segment was flawlessly completed, the news anchor was met with cheers and applause from her colleagues.

Shishir, 29, hopes her appearance on national TV will make a difference in cultural and political opinions.

“This could be revolutionary and create a new dimension in people’s thinking,” she told Thomson Reuters Foundation.

“The biggest problem is that people are not sensitized … I hope this can do that, and urge them to look after the many ‘Tashnuvas’ around them,” she added.

Growing up, Shishir faced bullying, harassment and exploitation based on how she identified. She later chose to leave home after her father refused to speak to her.

“The bullying was so unbearable I attempted suicide four times. My father stopped talking to me for years,” she said speaking to the The Independent.

“When I couldn’t cope with it any more, I left home. I couldn’t stand the neighbours telling my father about how I should act or walk in a masculine way.”

Shishir was able to continue with her studies after receiving a scholarship at a top local university to study public health.

Now, the 29-year-old studies alongside her new job as a news anchor for a private news channel.

Tipu Alam Milon, the TV station’s deputy managing director, is making an effort to increase inclusivity at the network.

“Our prime minister has taken many steps for the transgender people. Encouraged by such steps, we have appointed two transgender people, we want the attitude of society to change through these appointments,” he told the Southern Daily Echo.

While Shishir is the first transgender anchor in Bangladesh, other breakthrough examples of LGBTQ+ inclusivity have been seen across the media industry.

In 2014, India appointed a transgender news anchor for the private Tamil satellite channel in Tamil Nadu.