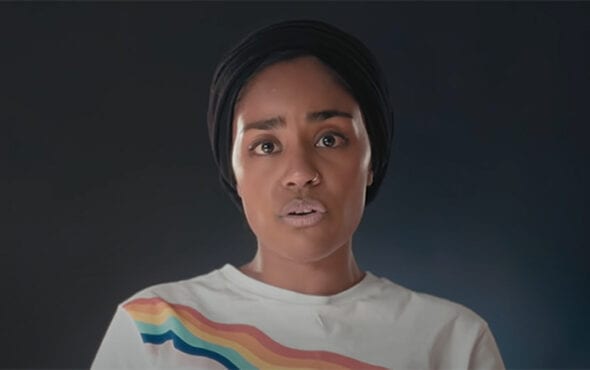 “I don’t want to drag you into gay Twitter this morning, but have you seen the bagel debate after bake-off last week?” Barr asked guest Nadiya Hussain.

For some context, Paul Hollywood set an especially tricky challenge for the amateur bakers during Bread Week. The task involved making a batch of equally sized rainbow bagels.

“I think the rainbow colours for me, although it originated over in the States, I think it represents the NHS,” Hollywood explained on the baking show. There’s no doubt we’re all here for the NHS and the incredible work they’ve achieved across the UK, especially during a pandemic, but there could at least be some acknowledgment of the Pride movement symbolism too.

In response to the bagel comments, Hussain questioned why Hollywood called the rainbow bagel an “NHS bagel” on the podcast.

Fellow host Barr suggested it was down to “COVID-19 pandemic vibes” that may have inspired him, but also added that “[Paul] must have known [the colours are not] just the [for] NHS”.

Hussain seemed unimpressed with the outcome: “Reference it properly for goodness sake, Paul Hollywood, come on,” she said, calling the celebrity chef out.

On a more general note, the TV baker revealed she was a fan of rainbow bagels calling them “great” and gave the audience a quick run through of what she pairs with them. Don’t worry, we’ve saved you from searching. You can listen to what Nadiya uses below or watch it here. Here’s a hint: it involves sweet cream, cheese, vanilla spread and birthday sprinkles.

"Reference it properly for goodness sake @PaulHollywood, come on!" 😂@BegumNadiya gave her opinion on those 'NHS Bagels' on @BritishBakeOff 👀🌈 pic.twitter.com/cJEPkg7K5N

We couldn’t have put it any better ourselves.