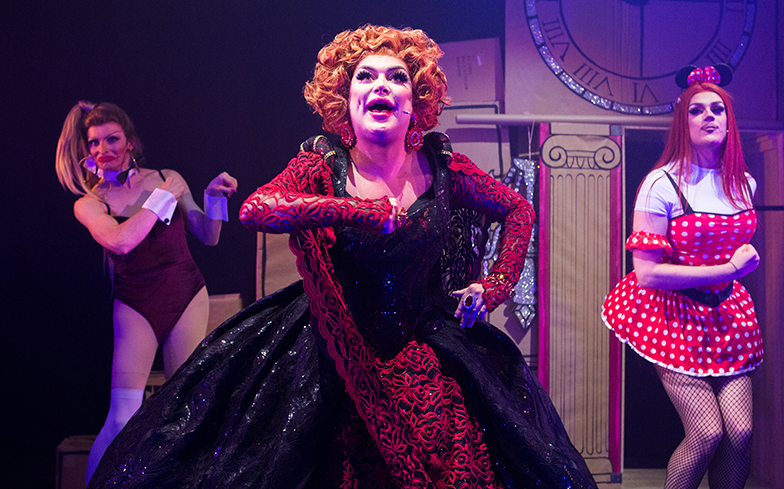 For those who haven’t yet seen the first season of Drag Race UK – and honestly, if you haven’t, where have you been? – then there’s very little point in checking out this rendition of Cinderella. Much of the humour derives from references to the TV show – so if you’re unfamiliar with that, you won’t find this performance very funny. For the rest of us, this delivers everything we expect – whether that’s Baga shouting “Much better!” at us a handful of times, breaking into a bit of Frock Destroyers or poking fun at The Vivienne or Divina, she entertains with her coarse charm and hilarious facial expressions.

She has some fierce competition, however – while Baga may be the big-name draw, this is an all-drag rendition and her co-stars give her a run for her money. The only male role in the show is Prince Charming, played by comedian Kemah Bob; all the other parts in the show are played by drag queens, mostly fawning over the prince. While there are lots of great moments, two performances really stand out.

Sheila Simmonds – best known for her appearance earlier this year on Britain’s Got Talent and, more locally, for running her Busy Lady Bingo in Soho – puts in a hilarious turn as the Fairy Godmother. She starts the whole show off meandering through the audience and takes the stage following an amusingly un-ladylike scramble across the chairs. Holly Stars, as Buttons, is probably the funniest on the stage – her deadpan delivery and casual putdowns had us in stitches throughout. At one point, the two of them lead a gloriously ramshackle singalong of the Twelve Days of Christmas – it’s a real highlight.

On to the actual production itself and, well… we’ve seen some cheap sets before but this takes flimsy to a whole new level. Everything is made from cardboard, with a little glitter thrown in for good measure – it all looks like it’s going to fall apart at any moment. We get that there’s another production in the space through the week, with this playing only on Sundays, so an elaborate set would have been tricky – but it would have been nice to see something a little less naff.

So the big question – is it worth seeing? Well, we’re not going to argue that it’s great theatre – this Cinderella isn’t big, or clever, or slick. Quite the opposite; it’s chaotic, shambolic, full of missed cues and slipped lines, and will probably not make a great deal of sense to those who haven’t seen Drag Race UK. But when the opening bars of Break Up (Bye Bye) kick in, and the whole audience joins in a mass singalong of “Baga Chipz is stunning, Baga Chipz is class”, it creates a great atmosphere. Objectively good? No. Bundles of fun? Absolutely.