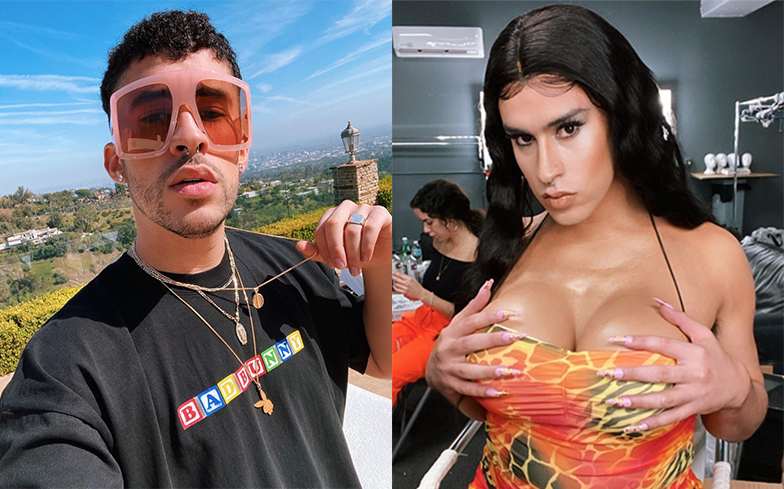 Bad Bunny is the LGBTQ ally we need and deserve.

Back in March, the Latin singer and rapper went viral on social media when he donned full drag – red latex, big breasts, the whole mothertucking shebang – in his incredible music video for Yo Perreo Sola.

He also appears topless and in chains while surrounded by powerful women on thrones.

In a recent cover interview with Rolling Stone, the star explained his decision to do drag, saying he’s “always felt like there [was] a part of me that is very feminine. But I never felt as masculine as I did the day I dressed up like a drag queen.”

Although Bad Bunny anticipated homophobic comments online, he knew the positive would outweigh the negative. “I knew there were going to be comments saying, ‘F—-t! Gay! Bad Bunny is over,'” he explained.

However, he became a drag queen to “show support to those who need it. I may not be gay, but I’m a human who cares.”

Bad Bunny became acquainted with the art-form when his cousin consulted him for music to use in his live shows. “He would come to my house so I could make his mixes. He explained the choreography to me. They were all Lady Gaga songs.”

He says he’s inspired by the gender theatre of professional wrestling because each wrestler “has their way of being, and it’s respected. They have long hair, they can paint their face, [but] they’re strong and powerful beings.”

Earlier this year, Bad Bunny paid tribute to Neulisa Luciano Ruiz (also known as Alexa), a transgender woman who was murdered in Puerto Rico, with a powerful performance on The Tonight Show Starring Jimmy Fallon.

The rapper wore a skirt and a sweater that read, “They killed Alexa, not a man with a skirt.” He wore the outfit as a statement against media that had misgendered Alexa.

“I feel a big commitment to the [trans] community. Now that we are in quarantine, 108 cases of gender-based violence [have been reported] in Puerto Rico,” he continued to tell Rolling Stone.

“As a human being, violence against women affects me. I am going to do what is within my reach to [work] against that. My message shouldn’t be a feminist message. It’s a universal message.”

Although Bad Bunny identifies as straight, he has a refreshing perspective on his sexuality.

In an interview with LA Times, he said: “It does not define me. At the end of the day, I don’t know if in 20 years I will like a man. One never knows in life. But at the moment I am heterosexual and I like women.”

He also explained why it’s so important for him to include queer and disenfranchised people in his work, saying “there are people who listen to reggaeton and love it and at the same time they have never felt represented within it.”

It’s safe to say Bad Bunny is one of the biggest LGBTQ allies in the entertainment industry and yes, we stan.