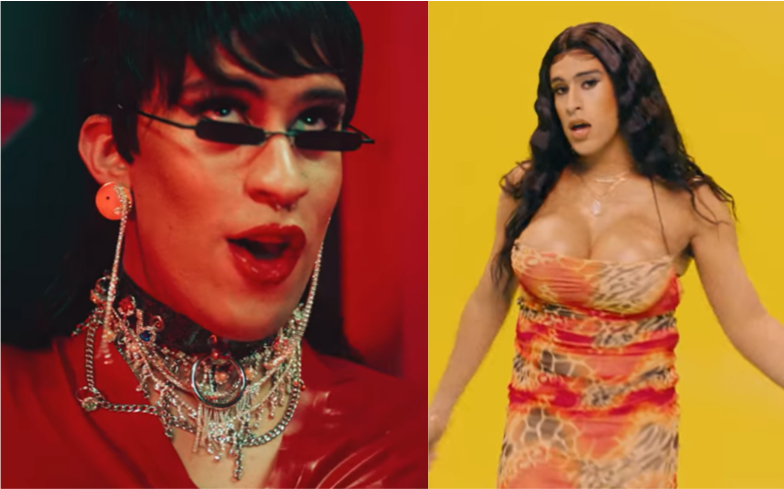 The rapper is challenging gender norms yet again.

Rapper and LGBTQ ally Bad Bunny has just released his latest music video, and in it he dons a whole lot of drag to look sickening throughout.

The song, Yo Perreo Sola, which features singer Nesi, tells the story of how Bad Bunny used to ignore Nesi, but now she’s turned the tables and is ignoring him. In his verses, Bunny raps how the party starts whenever the girl walks into the club, how everybody wants her and how she works to her terms only, instead of bending over backward to please a man.

Throughout the video, Bad Bunny wears a whole lot of drag, prominently appearing as a red-latex wearing diva, and a big-breasted lady. He also appears topless and in chains while surrounded by some powerful women on thrones.

The video also sees Bunny out of drag dancing cheek to cheek with a version of him in drag.

You can watch the video here, or below.

Bad Bunny has been a longtime ally to the LGBTQ community, and during a performance on The Tonight Show Starring Jimmy Fallon, he paid tribute to a murdered trans woman.

The rapper wore a skirt and a sweater that read, “They killed Alexa, not a man with a skirt.” He wore the shirt as a statement against media that had misgendered Alexa, previously describing her as a “man with a skirt.”

Alexa was killed in a park in Toa Baja, a city around 15 miles west of capital San Juan in February.

The singer has also said he “isn’t particuarly interested” when it comes to questions about his sexuality.

In an interview with LA Times, Bad Bunny said of his sexuality: “It does not define me. At the end of the day, I don’t know if in 20 years I will like a man. One never knows in life. But at the moment I am heterosexual and I like women.”

He also explained why it’s so important for him to include queer and disenfranchised people in his work, saying “there are people who listen to reggaeton and love it and at the same time they have never felt represented within it.”

The star continued: “In 20 or 30 years nobody had worried about that, but I did.”