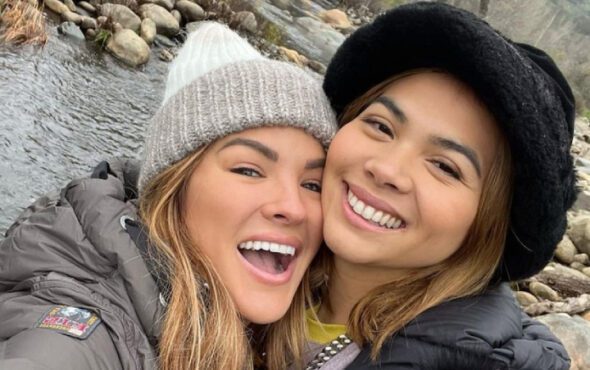 Bachelor star Becca Tilley opened up about her relationship with Hayley Kiyoko in her first interview since coming out.

On 20 May, Tilley and Kiyoko made headlines when the two confirmed their relationship in the latter’s music video for her track For The Girls.

In the romantic visual, the 31-year-old is shown as the first lesbian Bachelorette.

Like the series, Kiyoko meets an array of contestants who are fighting for her heart amongst a luxurious mansion backdrop.

However towards the end of the video, Kiyoko’s evening gets interrupted by the arrival of a new visitor – which ends up being the former Bachelor star.

After the video’s release, the two lovebirds took to social media to confirm their romantic relationship.

“Hard to say if this is a hard or soft launch, but it is a launch,” Tilley wrote alongside a compilation video of the two.

In an additional post, Kiyoko wrote: “This photo is from the first night we met at my Expectations album release party, we took this picture after 5 minutes. Her shirt said ‘no time for romance’….. it’s been 4 years. I guess she had some time.”

A few days after their announcement, the former Bachelor star divulged further into their four-year relationship during a recent episode of her podcast Scrubbing In with Becca Tilley and Tanya Rad.

“Hayley and I never were secret. We were very much ourselves, we held hands in public… I really made sure to make that distinction between ‘private’ and ‘secret,'” she explained.

“There’s such this warped perception of privacy via social media because we’re so expected to share everything,” she explained. “I always said we can go public if I can be in one of your videos.”

The episode then turned emotional when Tilley opened up about her fears of coming out.

“I was prepared for anything and everything. I was not prepared for the amount of love and support that we got,” she said in between tears. “Like I just could have never predicted.”

The 33-year-old also revealed that Kiyoko gave her endless support and encouragement ahead of their announcement.

“Hayley has really made me feel brave, and she was always like, ‘People love you and they want to see you happy.’ And I’m just so thankful for you guys,” she said.

Check out the happy couple in Hayley Kiyoko’s video For The Girls below.